Is Syria the key to Khashoggi’s death? | Inquirer Opinion

Is Syria the key to Khashoggi’s death? 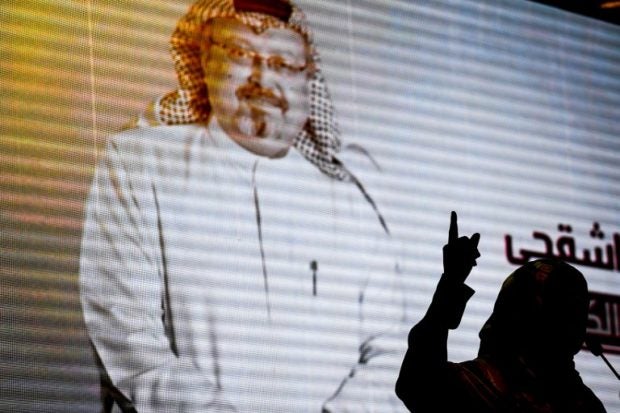 Nobel Peace Prize laureate Yemeni Tawakkol Karman stands in front of a digital image of Jamal Khashoggi as she speaks during a commemoration event of Khashoggi’s supporters on November 11, 2018 in Istanbul.  AFP

NEW DELHI –  The Saudis are going to get away with it.

Muhammad bin Salman, too. They may pay a price – we’ll travel in that direction later – but they remain the “vision of light” against Iran’s “vision of darkness”, in the words of Saudi Arabia’s ever more egregious foreign minister.

We are all, alas, making the same old Middle East mistake: of thinking that the bad guys will get overthrown or punished for their murders and transgressions and that the good guys (whoever they may be) will come out on top.

Jamal Khashoggi was the victim of murder most foul. But in the Middle East’s sectarian civil war, the Sunnis have got to win over the Shiites and the Saudis have got the money, and America’s president – for whom the epithet “insane” is now as irrelevant as it is obvious – has managed to quote the Saudis as claiming that Khashoggi was “an enemy of the people” and a member of the Muslim Brotherhood. Even if his murder was “terrible” and “a horrible crime”. It could very well be, announced the leader of the free world this week, that bin Salman had knowledge of the murder. “Maybe he did and maybe he didn’t!”

FEATURED STORIES
OPINION
ICC probe: Buckle up, we’re in for a long ride
OPINION
A country on trial
OPINION
Defend victims, not perpetrators

The story clip-clops along like an old horse and we all trot along behind this lovable, familiar, furry beast.

There was a kind of tragic inevitability behind Adel al-Jubair’s latest appearance as Saudi foreign minister in Bahrain, a Sunni monarchy with a Shiite majority where the UK has just opened a new naval base beside the headquarters of the US 5th Fleet. Al-Jubair accused the press – yes us, colleagues of Khashoggi – of “hysterical” coverage of his murder.

It was as if he was running the movie backwards to its original claim of innocence: when the kingdom stated that it had nothing to do with his butchery, that he had indeed left the Saudi consulate in Istanbul alive, that they had no idea what had happened to him. Hysteria indeed. How dare the media go on about Khashoggi being murdered and chopped into bits and secretly buried. Anyway, where was the body?

If there’s a murder, there’s got to be a body. And so here, briefly, we go back to Istanbul and to the Sultan himself, who doesn’t blame good old King Salman, but who really would like to find the corpse and who might – here we go again – have yet another tape of Khashoggi to send to the world’s intelligence services. Be sure our political leaders will not sully their ears by listening to it; Trump called the original recording “a suffering tape”.

Canada’s Trudeau chose not to listen to it. But they really should have put their ear to the loudspeaker. Listening to an Arab journalist telling his murderers that he was suffocating would have been a fairly accurate symbol of democracy in the Middle East today.

But Erdogan must have other plans. And here, I suspect, we should move a little south of the Sublime Porte and gaze over the plains of Idlib, the Syrian province where we were long ago told to expect – by Trump, the UN, the British, the EU, Amnesty International, Uncle Tom Cobley and his old grey mare – a bloody, gasinfected invasion by Syrian and Russian forces to finally destroy the Islamist fighters of Isis, al-Nusrah, al- Qaeda and their fellow jihadis, along with tens of thousands of civilians. Idlib is the rubbish basket for the enemies of the Syrian regime. Their only escape route is across the Turkish border – whence they originally came.

But since the Sultan doesn’t want them back, and since Syria and Russia see no point in another bloodbath when the Syrian war has almost concluded — though readers may check this conclusion against future events – the outstanding question remains: where should these assorted Sunni Islamist fighters and their families go?

Since their money and their weapons come from the Sunni Gulf and since their Wahhabi Sunni faith was inspired by the very same creed which governs the Saudi monarchy, what better location for their future welfare than one of Saudi Arabia’s vast sandpits? Could there be a more humane and convenient place for their “re-education” than the ascetic wastes of the Saudi Empty Quarter?

Surely the Saudis, who would according to Trump “gladly withdraw from Yemen”, could accommodate the lot of them, saving the west – yet again – from “world terror” while sparing themselves a second tape from Erdogan and the sudden and most inconvenient discovery of body parts from a victim whose demise may have been known – or maybe not – to Muhammad bin Salman.

Maybe he did and maybe he didn’t, as we must now say. The Russians must surely approve. The Americans, too. The Saudis would surely be making a sacrifice for all of us to take on so onerous a burden as the desert imprisonment of the Isis and Nusrah legions inside the kingdom itself. After all, these legions of crucifiers and executioners – I’m talking about Isis, of course – would certainly abide by prison rules when their guards are such experts in publicly chopping off the heads of alleged drug addicts and child murderers with the sword, not to mention the dismemberment of a journalist with a bone saw.

Can we see a deal in the making here? The Yemen war comes to an end (thanks to its arms-selling enablers in the west) and the Syrian war reaches its peaceful finale with the blessing of Vladimir Putin. Of the $450bn Saudi Arabia has promised to spend on weapons in the US – let’s have no more talk of a piece of paper – $110bn will go to Boeing, Lockheed Martin, Raytheon “and many other great US defense contractors”. Adel al-Jubair’s “vision of light” – Saudi Arabia, of course – can go to war with Iran’s “vision of darkness which seeks to spread sectarianism throughout the region”.

Khashoggi may have had a certain vision of darkness as they put the plastic bag over his head in the Saudi consulate last month, but in the Middle East the good guys don’t always come out on top. The war with Iran must be fought. The war against the Shiites must be fought.

Israel and Netanyahu – notice how those names have so far eluded us in our woeful tale today? – will be satisfied with their “secret” Saudi alliance against Iran. Boeing and Lockheed Martin will flourish, along with many other great US defense contractors. And the Saudi crown prince – unlike Khashoggi – will be assured of a long life and an honorable burial in old age. Preferably in one piece.