America should step aside and let the Koreas talk | Inquirer Opinion

America should step aside and let the Koreas talk 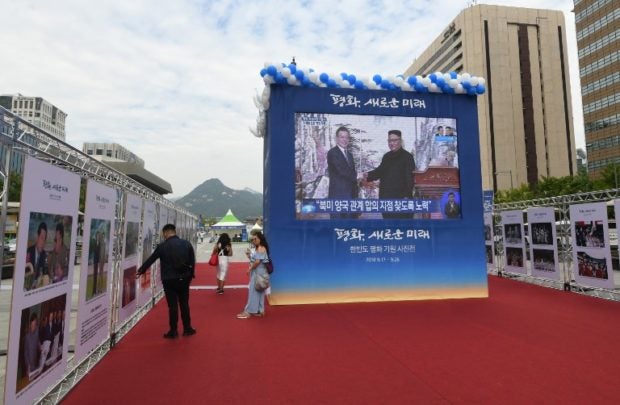 A screen shows live footage of a joint press conference between South Korean President Moon Jae-in and North Korean leader Kim Jong Un after their summit in Pyongyang, as people visit a photo exhibition for the inter-Korean summit in downtown Seoul on September 19, 2018. AFP

BANGKOK — North Korean leader Kim Jong-un and his counterpart to the South Moon Jae-in may have just dragged the globe a little farther from the brink of a nuclear abyss.

Their meeting in Pyongyang yesterday appeared warm and productive, which is good news for the two countries, and for the world. Kim agreed to “permanently” scrap his key missile facilities in the presence of foreign experts.

If the South can make serious inroads towards the North’s denuclearisation, then the dangerous tension between Pyongyang and Washington would ease.

Speaking together following their summit, the two leaders agreed to turn the Korean peninsula into a “land of peace without nuclear weapons and nuclear threats”.

Kim pledged to visit Seoul in the near future, an unprecedented step for a North Korean leader. The signs are positive that the two Koreas may be able to forge peace on their own terms, rather than be dictated to by a volatile Trump administration whose negotiations have veered between belligerent rhetoric and buddy talk.

Washington certainly has an interest in seeing peace on the Korean Peninsula, but America is an ocean away, and the concerns here of South Korea, Japan and China should not be overlooked.

Kim praised Moon on what was their third meeting this year.

“It’s not too much to say that it’s Moon’s efforts that arranged a historic North Korea-US summit. Because of that, the regional political situation has been stabilized and more progress on North Korea-US ties is expected,” South Korea media quoted Kim as saying.

Moon thanked Kim for a “bold decision” in opening a new era of cross-border goodwill.

Moon emphasized the summit was a push for “irreversible, permanent peace” and for better dialogue between North Korea and the United States. Yet the Trump administration would do well to realize that Seoul needs some breathing space: Washington’s interests do not take precedent over the fate of Koreans on either side of the border.

Moon brought South Korean business tycoons on his Pyongyang trip, a positive move towards sharing wealth and prosperity the northern neighbor so desperately needs. All major joint projects between the Koreas are at a standstill because of Washington-led international sanctions.

North Korea’s state-run media are blaming the deadlock on the United States, but tensions between Washington and Pyongyang must not be permitted to define the future of peace in the region.

The Rodong Sinmun newspaper said the United States is “stubbornly insisting” the North dismantle its nuclear weapons first, while at the same time it refuses to “including the declaration of the end of war which it had already pledged”.

Reading between the lines, Pyongyang’s strategy is to nudge Washington to step aside so that the two Koreas can work things out on their own terms.

The ball is now firmly in the court of the Trump administration. Perhaps it should consider giving South Korea, it’s long-time ally, more space to achieve further concessions from its neighbor.

But for this to work, North Korea must be serious about peace. To gain relief from economic pressures, Pyongyang has to do more than just dismantling its nuclear and rocket testing sites.

Now is the time for confidence-building measures.

A crucial move to boost mutual trust and confidence would be a formal agreement to end the Korean War, which came to a halt in 1953.