The reasons to mourn Kofi Annan 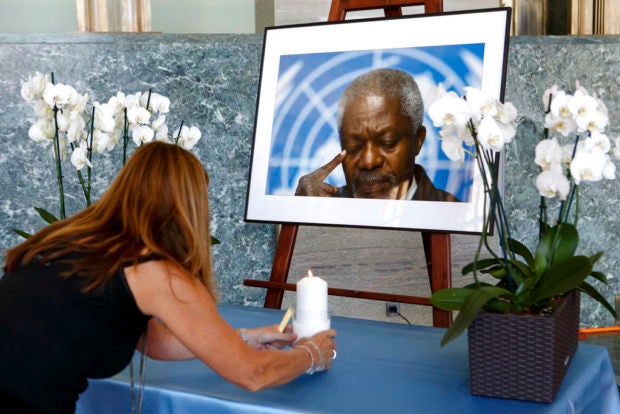 An UN staff member puts a candle in front of portrait of former United Nations Secretary General Kofi Annan prior to a ceremony of UN staff to pay tribute to Kofi Annan, at the ‘Salle des Pas Perdu’ in the European headquarters of the United Nations in Geneva, Switzerland, Monday, Aug. 20, 2018. Annan died on Aug. 18 2018 at the age of 80 years. (Salvatore Di Nolfi/Keystone via AP)

BANGKOK — A classic insider and a charismatic symbol of the United Nations who became the organization’s first black, African secretary general and later a recipient of the Nobel Peace Prize, Kofi Annan died this past weekend, leaving behind a world that will greatly miss him, his integrity and his passion.

“Kofi Annan was a global statesman and a deeply committed internationalist who fought throughout his life for a fairer and more peaceful world,” said a statement from his foundation. “He was an ardent champion of peace, sustainable development, human rights and the rule of law.”

Annan knew how to make friends with major players, especially those in Washington who set the US budget allocations for the United Nations. As a career insider at the UN, Annan knew which jobs had to be cut, and he winnowed a great many of them immediately after assuming the top post. But he never strayed from his main goals – to fight poverty, injustice and disease among less advantaged member countries.

Annan clashed with the US and Britain over the legality of the 2003 Iraq invasion, but former US President George W Bush forgot that on Sunday when he became one of the first international figures to praise Annan. He called him “a tireless leader of the United Nations” whose “voice of experience will be missed around the world”. Annan always strove for a better world, added another former president, Barack Obama.

He consistently reminded world leaders, no matter how powerful they may be, of their moral obligations to innocent civilians in conflict zones.Even after stepping down from the UN top post in which he served two successive five-year terms, Annan continued to engage in world events and promote peace, justice and the struggle against violent extremism. He continued to reach out to the younger generations, saying just this year, “You are never too young to lead and we are never too old to learn.”

A native of Ghana, Annan had a special place in his heart for Africa, continuing to work with the African Progress Panel until his death. He was also an early leader of the Alliance for a Green Revolution in Africa. He was a champion of women’s rights, too, once famously saying, “There is no tool for development more effective than the empowerment of women.”

Citizens of Southeast Asia will remember him with great fondness as a moral arbiter who wept with the people of East Timor as they recounted atrocities committed against them during the separatism crisis. He also tried to help the Rohingya Muslims of Myanmar by proposing a fair deal for them in a commissioned report to Aung San Suu Kyi’s government. The report considered humanitarian and developmental issues, access to basic services, legal questions including citizenship and the assurance of basic rights, and security to all people in all communities.

Sadly, Suu Kyi, his fellow Nobel laureate and now Myanmar’s de facto leader as state counsellor, lacked the courage or the wherewithal to take up his suggestions to the fullest. A subsequent panel headed by Thailand’s Surakiart Sathirathai has just released its own report on ways to implement the Annan proposals and failed to even mention the single root problem – the denial of citizenship for the Rohingya.

In such foolish ways are treasured legacies lost.