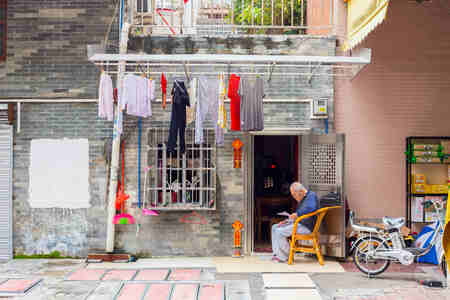 As I write this, Lolo Ongto would have been 99 years old. My memory of him is but a glimpse of his love. I’m sad because I lost him when I was only eight years old. I was too young to remember all the stories he shared, too young to ask him about the things of this life. But the stories from the people around him help me remember him better.

Lolo Ongto was diligent. Day in and day out, he worked hard to provide for his family. Mama told me he migrated to the Philippines with some of his relatives from Fujian, China. He bought and sold groceries for a living. At the time of the war against the Japanese, his business was put to a halt, and he endured living up in the mountains. Lolo Ongto, lola and the rest of his relatives survived by eating sweet potatoes every day.

He was strong and resilient. After the war, he conquered several ups and downs concerning the grocery store business. He worked even harder after the building where his store and his home was got burned.

Mama also told me that he and lola only met once before their marriage — and that was on their engagement day. Despite him having an arranged marriage, he kept his commitment to it, being always the companion of lola, until her passing.

Lolo Ongto’s only vice was to light cigars. They said that he could finish half a pack in a day. And yet he willingly gave that up when he knew I was coming along the way, and that cigars are bad for an expecting mama and her baby. Smoking also caused his death, but his giving up of it gave me life. Thank you lolo, for your love for me. I will always cherish it even though I only knew little of it. I will be forever grateful to him because he wanted what was best for me.

When I was old enough to eat potato chips, he kept a stash of Pringles inside his dresser for us kids to snack on. Every time we entered his room, we knew there’s something for us. My mama sneaked in to his room most of the time, to get the junk food away, but lolo would insist in keeping them because it gave us delight.

Lolo Ongto taught us how to save. Our coin banks were also kept inside his dresser. Sometimes, he put coins in them on our behalf. He taught us that money is earned, and that it is wise to always keep a portion of what we have, in anticipation of the rainy days.

I remember the times when we ate meals together. He ate with his favorite pair of chopsticks and china bowl. We still keep these things of his with us, until now. I will always be reminded of lolo when I see these things. His portrait on our living room wall also reminds me of him and the great times we’ve shared on early weekday mornings.

Upon opening the door from my room, I always found him sitting on the couch in front of the television. Most of the time, it was still dark outside. Our neighbors were not awake yet. I still had plenty of time to spare before going to school. I would often pull a chair and sit next to him. I cannot remember what the shows were. I did not even understand what the shows meant. I just remembered that I liked sitting next to him. It gave me joy. I knew that it also made him smile. I just felt secure sitting there.

I didn’t know he was sick. I don’t remember him being sick in front of us. He was just the happy and jolly person that I knew. He kept his place with us at the dining table. He still moved so quickly. Then one day, he just had to ride a helicopter to Manila, to find treatments. Only then did I begin to realize he was ill. I didn’t know how to interact with him after that. Some days, I feared that we might lose him.

Then, the dreaded day came. When Lolo Ongto died, I felt scared looking at his portrait on our wall. I can’t stare at it. But maybe not so much out of fear but more out of sorrow, because all of a sudden, my moments with him would flash back. When we lost him, I grieved for a loved one for the very first time. My mama and my aunties told me that lola died the year before I was born. I didn’t know how to grieve then, and couldn’t have. But by the time we lost lolo, I was old enough to know loss, and my young heart found it painful. 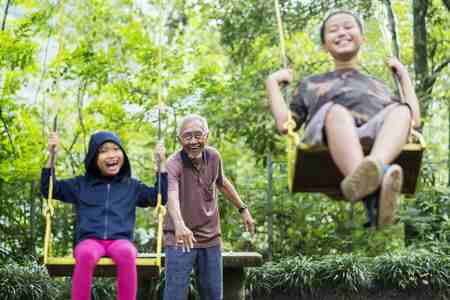 It was then that I learned regret too. I thought we should have spent more time with lolo by doing things together or even by just talking to him a little bit longer. We should have celebrated his birthdays more often. We should have talked in Hokkien, his dialect, so that it could be passed on in the future, to our own children, his great grandchildren.

I heard more stories about him during and after the wake. They said he loved to visit our hometown. Mama told me that he provided scholarships to young people, and that he helped and contributed in getting roads paved. He generously gave to his colleagues who were in need. Everyone spoke well of him. Even our employees kept a good memory of him.

I felt that Lolo Ongto saw me crying at my bedside, one random night after his funeral. My aunt and I visited him at the cemetery the next day. In my mind, I said, “Forgive me lolo, I didn’t know how to communicate to you. I never said, ‘I love you.’ I have taken things for granted.”

I wish you were still here today, but I know that God’s plans for our lives must prevail.

Jannel Serrano is an entrepreneur, writer and minimalist advocate from Iriga City, who also enjoys photography, the outdoors, and collecting clippings and journals. On why she wanted to write about her Lolo Ongto, she said, “I realized that we often speak about our love for our parents, siblings or partner in life, but we seldom talk about our grandparents. My goal is to influence readers to really spend time with the older generation. Kids these days often take old people for granted.”

Read Next
Editorial cartoon, August 17, 2018
EDITORS' PICK
Get exciting deals and discounts when you download the new McDonald’s App
PAL: Passengers with flights to parts of China may request for refund, rebooking
Batangas execs, Taal evacuees thank House; hopeful on rehab efforts
SM continues to send relief assistance to remote towns in Batangas
5 years after Mamasapano, son of fallen SAF 44 trooper remembers his ‘idol’
‘A greener, cleaner tomorrow’: A how-to guide for Filipinos who want to help with today’s energy crisis
MOST READ
Taal’s sulfur dioxide emission increases
No time for revelry; Tagaytay instead plans for alert level 5
Seized food items from China tested positive for ASF–BOC
Dina Bonnevie on Coney Reyes: We have forgiven each other
Don't miss out on the latest news and information.

PAL: Passengers with flights to parts of China may request for refund, rebooking

Dina Bonnevie on Coney Reyes: We have forgiven each other

Virus scare: 600 Chinese from Wuhan must leave PH by Jan. 27