Why Asia is shaping the future of travel 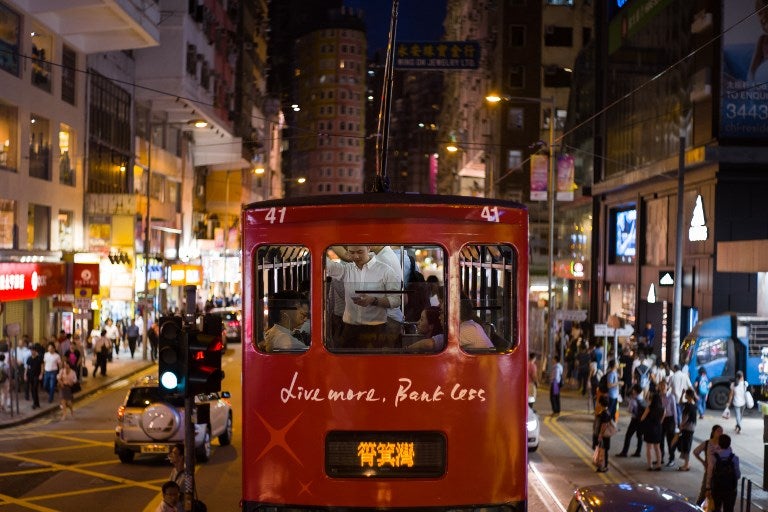 Passersby walk on a street as a commuter (C) uses his mobile phone on the upper deck of a tram in Hong Kong on July 25, 2018. / AFP PHOTO / Anthony WALLACE

BANGKOK — Historically, we have seen developed economies in the West lead in technology innovation, and then introduce it to the East for adoption. However, the early to mid-2000s heralded an extraordinary shift.

Many Eastern markets — particularly China thanks largely to efforts by pro-reform leader Deng Xiaoping — transitioned from “cheap and cheerful manufacturers” to markets producing quality technology to rival or outclass that of its Western counterparts. Today, emerging Asian countries are spearheading new technologies to solve contemporary challenges.

With the shift to service-based economies, emerging and developing countries in Asia are seeing some of the strongest gross domestic product growth globally. They are forecast to grow at around 6.5 percent over 2018-2019, and continue to contribute to more than half of global growth annually.

Strong economies and Asia’s increasing wealth has resulted in the rise of an affluent middle class. The travel industry has been a clear beneficiary: Asia is now a travel powerhouse. Today, China is the largest travel market globally and by 2020 two in every five travelers will be Asian.

Along with its increased wealth, Asia’s capability to innovate has accelerated and will push digital transformation in the travel industry forward. The region is already ahead in several critical factors that support tech advancement. Four out of the top 10 countries boasting the fastest fixed broadband internet speeds globally are in Asia. South Korea is leading the charge with the highest average connection speed in the world, followed closely by Hong Kong, Singapore and Japan.

Meanwhile, China is leading the push for 5G mobile technology, and is shaping up to have the biggest 5G market by 2022. By 2025, China will account for more than 40 percent of the world’s 5G connections. Companies in Asia are also truly “mobile-first”, developing for mobile before they think about desktop.

Finally, but increasingly importantly, the cost of maintaining cloud infrastructure in Asia is much cheaper than in the West, helping them to push ahead.

There’s also an abundance of STEM (science, technology, engineering and maths) skills coming out of Asia, coupled with an entrepreneurial spirit. Notably, Asia was home to more than 47 percent of all international patents filed in 2016, almost the combined total from North America and Europe. This is one of the reasons we launched the traveltech startup community Amadeus Next for Asia Pacific — to support the thriving ecosystem of “next gen” travel technologies in Asia, and to learn from some of the most innovative travel startups in the region.

Asia also has a strong commitment to investment in research and development (R&D). Specifically, China’s R&D investment will surpass that of the United States by 2020, with companies dedicating phenomenal amounts to research.

A large part of Asia’s success is, and will increasingly be, as a result of its ability to address its own market needs. A lot of what happens in the West is not relevant here, therefore the region must develop its own ideas and technologies to solve its unique challenges.

Examples of Asian innovations include travel and expense management company Baoku, among the first to develop a SaaS solution to cater to China’s growing business travel market, which surpassed the US in 2016 and is now worth upwards of US$300 billion. Another is 12GoAsia, which supports ASEAN’s complex transportation networks on both the B2B and B2C sides by providing online ticketing services for inter-city bus, train, ferry, transfers, flights and hotels.

Additional travel technologies developed to improve the travel experiences for travelers in Asia include Malaysia’s BorderPass and India’s ConfirmTKT. BorderPass was developed to enable the large number of business travelers that frequently cross Asia’s borders to “pre-clear” airports’ immigration check-points, speeding up the passage for frequent travelers. ConfirmTKT addresses the challenge in India where travelers often have to book a long- distance rail ticket up to four months in advance for confirmed travel dates. It shortens the time between booking and confirmation of rail tickets and assists travelers to identify alternative travel routes using its app.

Companies in emerging Asia are also actively pursuing opportunities to capitalize on the rise of the Asian travelers. One example is Indonesia’s Traveloka.com, who saw the opportunity to provide more than just price comparisons, to move towards ticketing as well, resulting in soaring market demands. The company has also established partnerships with more than 100 domestic and international airlines, serving more than 200,000 routes worldwide.

We’re also seeing robotics being rolled-out at an almost terrifying pace in Asia. In Singapore, M Social was the first hotel to have a front-of-house autonomous service chef robot that prepares the perfect eggs for their in-house guests. In Japan, H.I.S Co employs more robots than humans in some of its hotels. There are robots to help you check-in, robots to carry your luggage, and robots to haul your trash away. In China, travel platform Mafengwo is developing a concept for world’s first intelligent travel robot Mafeng.

Mafengwo has gained popularity among younger travelers in particular, who value the “independent” information available through its traveler communities. Now this robot it is developing will accompany travelers throughout their trip and use the big data to provide users with personalized travel experience. For instance, the robot will create itineraries and recommend activities based on a user’s past trips and personal preferences.

Asian innovators have also been quick to put blockchain into travel technology. Singapore Airlines’ KrisFlyer has launched the world’s first blockchain-based digital wallet, which will allow their membership base to use digital KrisFlyer miles for point-of-sale transactions at participating retail merchants.

A Chinese project “Go Globe Chain” is applying blockchain technology to build up decentralized B&amp;B booking systems to avoid false trading and credit risks. These blockchain developments have the possibility to revolutionize the travel industry.

It is impossible to speculate where the next Uber or AirBnB will come from, but it is clear that Asia has been bitten by the “tech bug”, and is on the cusp of a tech boom. The innovation we are seeing is almost overwhelming, and highlights just how agile Asia is when it comes to developing new technologies to address unique market challenges and explore new ideas.

Asia’s relatively young tech environment, which is not weighed down by legacy systems, coupled with a rising tech-savvy middle class, all point to a future where Asian travel innovations will thrive.

Duterte ‘sure’ China will be first to develop COVID-19 vaccine

Duterte ‘sure’ China will be first to develop COVID-19 vaccine