Offline in the online era 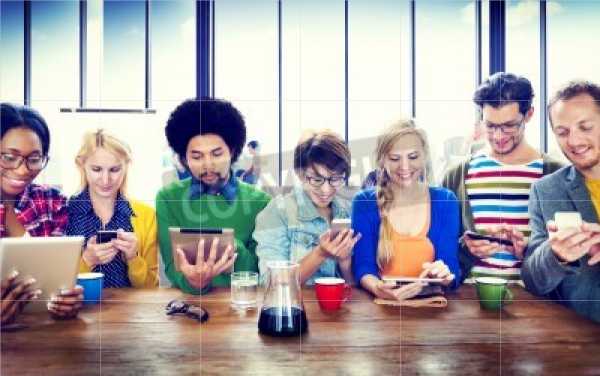 NEW DELHI — Faster transportation, faster communications, abundant knowledge and better creature comforts have not translated to better interpersonal relationships. So, despite being close to one another physically, people are no longer close to each other emotionally than they ever were. Often lost in the impersonal cyber world through their digital devices, many of the homo sapiens have become like automation.

A new ‘Digital Divide’ is perceptible in our society despite the amplified access to the worldwide web. Indeed, the facile access to the digital devices has created this digital divide where many of us are too engrossed in our material world to look for an uplifting meaning to our ephemeral lives. The result is a reality where despite being online in the cyber world, many of us are offline in our relationships and oblivious to the transcendental non-material reality.

Overwhelmed by our bloated ‘ego’, many of us have dug ourselves in our respective cocoons in such a manner that we don’t wish to see beyond our ‘Self’ and it is this ‘neo-narcissism’ that is doing us in. Our over-inflated ‘ego’ often incapacitates us to be able to recognize the existence of the ‘Super Ego’ (aka society). Our perceived superiority complex is nothing but a facade for our inferiority complex; otherwise, a ‘superior’ individual does not need to assert or prove one’s superiority. Such a mindset also prevents us from accepting any critics or criticisms. Critics are, in fact, seen as ‘Green Devils’ out to hurt and harm our existence.

By imbibing such spurious beliefs, many of us have unwittingly surrounded ourselves with apple-polishing toadies who keep fawning on us. The consequent blinkered vision does not allow us to look beyond the tip of our nose as we shy away from facing the stark reality. By cultivating such an outlook, we don’t want to do the same to others as the same compromises our immediate short-term interests. Hence, most of us neither accept the truth nor do we tell the truth. The consequent result is often disastrous, much to the chagrin of us all.

There have been several instances of people who harbored the delusion of invincibility about themselves, but they were all consigned to the footnotes of history as a small speck or dark dots, just because they refused to see the writing on the wall. Be it the real-life personalities such as Adolf Hitler, Benito Mussolini, Saddam Hussain, Osama bin Laden, Josep Stalin, General Noriega, Idi Amin, mythological figures like Ravana, Duryodhana, Kansa or organizational entities like Orkut, Nokia, the USSR, the League of Nations or closer home, the Indian National Congress or the CPI-M ~ they have all suffered from delusions of self-importance to insulate themselves away from the truth or the winds of change to lose out in the race of survival to go down as failed entities who could not keep pace with time.

However as failures, they definitely have their own significance for posterity, but the point is the number of such people is increasing both in our personal and public life. They can neither comprehend the reality themselves nor are they enlightened by others. They are, actually, the ‘Naked Emperors’ of our planet who don’t have the luxury or privilege of having genuine advisors or critics who could tell the truth to their face. Otherwise, there would be no reason for politicians like Donald Trump, Kim Jong-un or many of our home-grown types to keep conducting themselves the way they have done so far, unconcerned and oblivious to the harsh truths or hollowness they preside over. Such people think that if they plug their ears, others will not hear the toll of the bell or if they shut their eyes, the bad and the ugly would cease to be visible.

Such people decline to believe that in this world of complex interdependence where global problems can be resolved only through globally-coordinated moves, such a self-seeking and self-centered approach would boomerang to their own detriment. So, if the US is debunking the Kyoto Protocol today or if North Korea is brandishing its nukes (which Mao Zedong once termed ‘paper tigers’), they don’t know that their unsuspecting Frankenstein would slowly sneak on them to finally devour them at a time when they would have no time or opportunity to react and respond.

As victims of exaggerated self-importance, these people or entities never have their feet on the ground and often float in the rarefied ethereal world, not realizing that the Newtonian Law of Gravity catches up with us all by ensuring a very hard crash-landing for those who don’t prepare for the same. Such ‘Naked Emperors’ are strutting around without any veneer of dignity, without sensing the quiet chuckle that the world is enjoying at their expense.

The tragedy is that such things are happening at the micro level as much as at the macro level. The advisors don’t share the inconvenient truths, the spouses don’t tell the truth to each other, the parents don’t share the truth with their children or our friends ingratiate to us without being truthful. Our fear of earning others’ wrath or jeopardizing our interest has attenuated our spine and guts. The ‘Homo Erectus’ is forever stooping and bending to conquer his world with insidious consequences. Their triumphs are confined to the four walls of their own self-interests.

The herd mentality predominates. In our attempt to feather our nest, none is willing to question others and ruffle their feathers. This is turning out to be dangerous as it has ensured the continuance of the ordinary and mundane beyond the prudent limits. Below par is par for the course now.

There are ‘naked emperors’ in abundance, not realizing that there are not many left among us who could call a spade, a spade. Most of us are looking sideways when it comes to declaiming the inconvenient truth because a selfish interest prevents us from doing so.

We have created false images and imaginary values and have been chasing them ever since. And most of us are doing this at the expense of our eternal self-interest i.e. our own spiritual growth and liberation from the cycle of life and death. People are not at all clear about the purpose of their birth in this world nor do they want to know the same, immersed as they are in their daily struggle for survival.

Ergo, if we wish to grow as a society, we need to realize the immediate purpose of our advent in this world. We should also start questioning and countering the normal and regular to rediscover the values of life as hidden in this vast universe, to progress further and take our civilization beyond the routine and the mundane. We need to reinvent ourselves to subsist and survive. Otherwise, as a civilization and as God’s best creation, we shall be doomed. We should also stop being ‘naked emperors’ ourselves and we should ensure that the other ‘naked emperors’ amongst us are appositely clothed. The sooner, the better. A life of open, free and reinvigorating discussion and discourse enriched by constant criticism is something we must nurture with due care and caution to continue cherishing and relishing this human life.