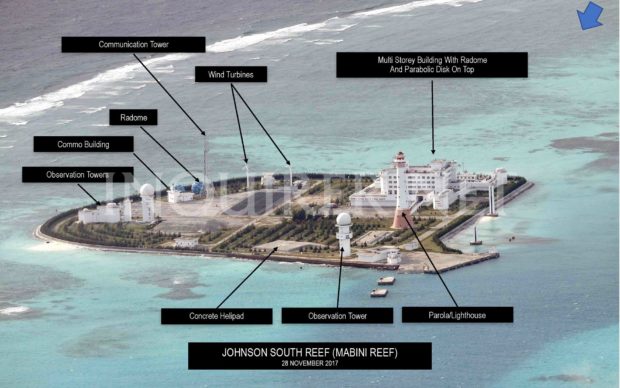 (Editor’s Note: The author is the chair of ADR Institute. He is a former secretary of foreign affairs and ambassador of the Philippines to the United States.)

The discovery of China’s deployment of missiles on three Philippine reefs in the Spratly archipelago is deeply concerning but not the least bit surprising.

If one has dealt with China, of certainty is the stark inconsistency between what is being declared and what is actually happening on the ground.

Regardless of Beijing’s commitment not to militarize the South China Sea, its methodical upgrading of military aspects on the artificial islands it has built on disputed reefs in the strategic waterway will surely and progressively continue.

In other words, the salami slicing proceeds as planned.

Notwithstanding the fact that the July 2016 ruling by the Permanent Court of Arbitration in The Hague in favor of the Philippines is now an integral part of international law, China will persist in flexing its muscles to threaten those who challenge its claim of sovereignty over nearly the entire South China Sea.

Former President Benigno Aquino III ensured that we had undertaken all possible means—both bilateral and multilateral—to achieve a political and diplomatic solution to no avail.

As a last resort, we pursued a legal track, which resulted in an overwhelming victory for the Filipino people.

When the arbitral outcome was announced during the beginning of President Duterte’s term, the whole world awaited what the Philippines could and would do.

Our new government unfortunately decided to manifest the softest diplomacy possible toward China by offering to shelve any discussions on the The Hague tribunal’s ruling.

Beijing’s calculated response was to advance as planned in further militarizing the artificial islands.

Since diplomacy is about reciprocity, with such a response, should there not be urgency in revisiting our foreign policy strategy?

To begin with, should we be accepting China’s unlawful expansion agenda as a fait accompli that renders us helpless?

According to the United Nations Convention on the Law of the Sea (Unclos), what China has done and is continuing to do in the South China Sea is unlawful.

We should therefore start from there, and not end there. Ergo, we should start by not allowing ourselves to be bullied into a position of acquiescence.

We should also not allow ourselves to be directly threatened with war as the Chinese president had allegedly done with our President. The threat of the use of force is an outright violation of the UN Charter.

On the deployment of missiles, should we not immediately issue a note of protest in order to protect our legal position?

A host of other options is available to us with regard to the South China Sea.

Should we differentiate between the importance of “promised” benefits vs promoting national security?

Should we be showing greater appreciation for the support of traditional partners hoping that they can be galvanized multilaterally to convince China to adhere to what is lawful?

Should we be consulting regularly with acting Chief Justice Antonio Carpio to benefit from his wisdom, expertise and sound judgment on the South China Sea challenges?

Should we be studying recommendations on converting reclaimed islands into marine parks?

Should we be working with the UN General Assembly on how it can help in consolidating its members to promote international law, specifically Unclos?

Should we be proactive in the development of the proposed code of conduct in the South China Sea, given that China will only agree to conclude such a code with the Association of Southeast Asian Nations when its expansion agenda will have been completed?

Further on the code of conduct, should we be mindful as well that China will use the code, if we allow them, to protect and preserve their unlawful gains in the South China Sea?

Should we conduct a national security summit to discuss these and other options to preserve the territorial integrity and sovereignty of the Philippine republic?

Moreover, when will we consider further tasking the Department of Foreign Affairs officials, who are the best and the brightest in the government, to formulate other doable options?

Finally, we are a sovereign nation with a proud heritage of patriotism, of courage and of standing for what we believe is right in protecting our country, our families, our friends, and all our people.

We are opposed to war, as we should be. But we should endeavor to never allow ourselves to be bullied, not by any threatening potential aggressor, whoever that might be.

That is why there is every right and reason for us to reinforce ourselves even just to thoughtfully muster a minimum credible deterrence posture.

On this potential threat from the South China Sea, if we, for example, were to develop an arsenal of mobile ground missiles that could be strategically placed along the length of Palawan, this would send a message to anyone who may wish to do us harm. No matter how powerful the aggressor, at the very least, they must be prepared to suffer from us a bloody nose.

Read Next
Editorial cartoon, May 7, 2018
EDITORS' PICK
The Best Tech Gifts For The 2022 Holidays
The vivo Y16 makes the season of giving more thoughtful for the whole family
House energy committee chair Arroyo bats for cheap electricity
Marcos urges Filipinos to be like Bonifacio: honest, patriotic
Egg prices rise due to bird flu, increased holiday demand | #INQToday
18,529 out of 24,903 pass nursing board exam
MOST READ
Mel Tiangco on co-anchor Mike Enriquez’s condition, ‘rivalry’ with Korina Sanchez
LOOK: Vina Morales goes to Boracay with mystery man
Marcos urges Filipinos to be like Bonifacio: honest, patriotic
Ref admits to cheating: How Manny Pacquiao snagged the win
Don't miss out on the latest news and information.