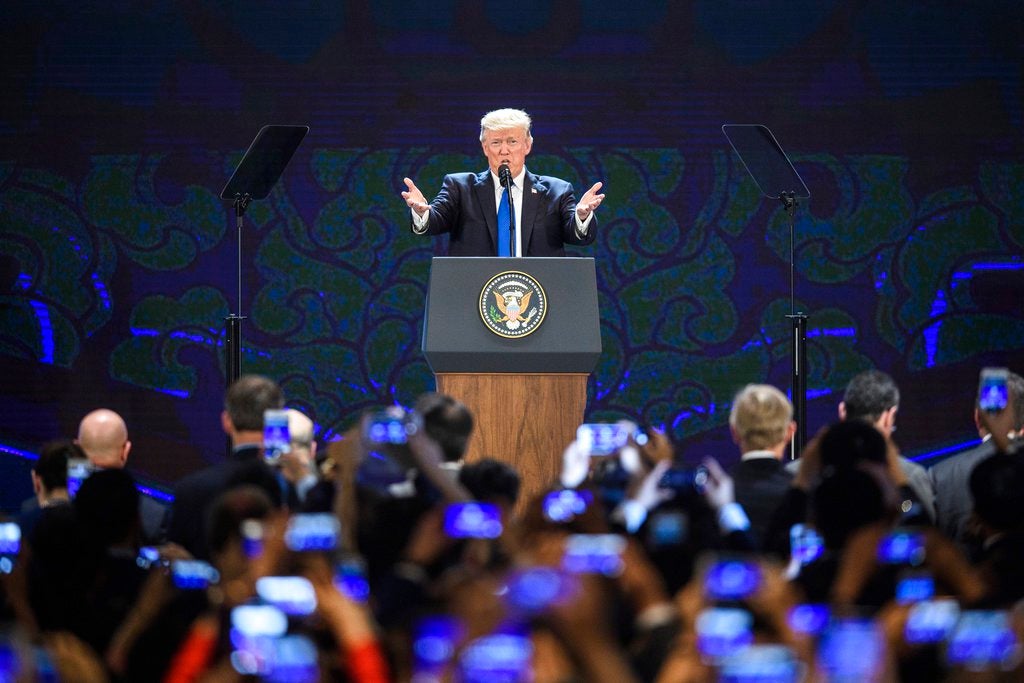 US President Donald Trump speaks on the final day of the APEC CEO Summit, part of the broader Asia-Pacific Economic Cooperation (APEC) leaders’ summit, in the central Vietnamese city of Danang on Friday Nov. 10, 2017. World leaders and senior business figures are gathering in the Vietnamese city of Danang this week for the annual 21-member APEC summit. (Anthony Wallace, Pool via AP)

Saturday marks the first anniversary since Donald Trump became president of the United States. How can the international order be maintained while dealing with this unconventional leader? A lot rests on judicious handling by each country, including Japan.

The Trump administration’s policy in the Asia Pacific has leaned in a more realistic direction lately compared to just after its inauguration. The increasing importance of the Japan-U.S. and U.S.-South Korea alliances following the escalation of North Korea’s nuclear and missile development programs is seemingly behind this shift in policy.

It is important to stick to the principle of seeking a diplomatic solution to the problem by applying maximum pressure on North Korea militarily and economically and drawing Pyongyang out for talks.

Trump is urged to refrain from making careless comments that could accelerate tensions, such as those regarding a “nuclear button.”

It is praiseworthy that Trump has begun strengthening the U.S. military by clearly expressing his intent to increase military spending under the slogan of “peace through strength.”

This can be expected to create a certain effect of warning China, which has relentlessly pursued hegemonic moves such as militarizing man-made islands in the South China Sea.

Another sign that can be seen as positive is that the Trump administration has begun strengthening coordination with Japan, India and Australia in response to the “free and open Indo-Pacific strategy” proposed by Prime Minister Shinzo Abe.

Attention must be paid to the fact that Trump is from the business sector and lacks a consistent diplomatic strategy. Moreover, his awareness of the importance of respecting the international order and universal values such as democracy and human rights is low.

Relevant countries need to keep an eye on possible “deal diplomacy,” such as an approval of China’s maritime advancement in exchange for a reduction in the U.S. trade deficit toward China, or the turning of a blind eye toward Russia’s hard-line stances in order to foster cooperation regarding terrorism countermeasures. Countries must cope with these issues appropriately.

China has trumpeted that it will “lead free trade and international cooperation” in a manner tantamount to taking over the role of the United States. Leaving this unaddressed could lead to an approval of the notion that the political system of a one-party dictatorship is superior.

Japan should keep deepening the alliance and sharing strategies with the United States while continuing efforts to convince the Trump administration of the importance of the Trans-Pacific Partnership. Trump is urged to deepen his understanding that the stability and prosperity of Asia is a shared interest of Japan and the United States.

Trump’s support rate has dropped below 40 percent to a record low level. He has failed to deliver on the words in his inaugural address to unite the people.

His irresponsible remarks regarding women, African-Americans, Muslims, and Central and South American countries, among others, have stirred up confrontations between pro- and anti-Trump groups and further deepened divisions in American society. His repeated use of abusive language has even numbed the senses of the people on the receiving end.

He has dismissed critical media reports as “fake news” and taken a self-righteous attitude by not correcting his own factual errors. This stance has undoubtedly ruined the authority of — and trust in — the U.S. presidency.

It is also problematic that he, without facing stern realities squarely, sticks to his bid to carry out the radical policies he pledged during the presidential election campaign.

Symbolic of this could be his announcements to withdraw from the TPP and Paris Agreement on measures against global warming. Without sufficiently studying the rationality of withdrawing and the corrective measures to subsequently be taken, Trump has prioritized his “America First” doctrine and ruining the achievements of the previous Obama administration.

Dismissing politics that center on the establishment, he has been attempting to appeal to his core supporters, including white workers, as he did during the campaign period.

Does he believe that pursuing his own style of politics will lead to reelection in the 2020 presidential election?

That arrangements have yet to be made for devising and implementing policies cannot be overlooked. The administration does not have many experts, and appointments of high-ranking officials in departments and agencies have been delayed. Even an ambassador to South Korea is yet to be appointed.

White House Chief of Staff John Kelly and Defense Secretary Jim Mattis, both hailing from the military circle, are among the people who have managed to sustain the Trump administration, centering on foreign and security policies. Trump’s reckless behavior has conspicuously been halted by the courts and Congress.

Aides to Trump have been dismissed one after another. Even White House Chief Strategist Steve Bannon, who led Trump to election victory, has parted ways with the administration. Stable management of the administration cannot be expected as long as power is concentrated on Trump and his relatives, including his eldest daughter, Ivanka.

The robust U.S. economy serves as a tailwind. U.S. stock prices have reached a record high and the jobless rate has hovered at low levels. A focal point is whether the brisk business climate can be maintained through such measures as tax system reforms centering on tax cuts, and deregulation.

The midterm elections for U.S. Congress are set for November. The polls will provide voters with the chance to evaluate the Trump administration. A setback for the Republican Party in the elections could lead to a drastic weakening of Trump’s unifying force.

Read Next
Editorial cartoon, January 21, 2018
EDITORS' PICK
Leveling up your ‘lutong bahay’ with the kitchen companion you never knew you needed
Philippines’ COVID-19 cases accelerate to 18,638
Duterte certifies as urgent anti-terror bill
Someone from the Philippines can become $356 Million richer this Tuesday
Cherry Mobile teams up with Cloud Panda PH, launches online store
‘Puno na lahat:’ Metro workers brave lack of public transport, rains on Day 1 of GCQ
MOST READ
‘If I had not been SolGen, I will make you eat your words,’ Calida tells Coco Martin
51 percent of German firms holding back investments in PH, but not because of COVID-19
5 car dealership outlets shutting down
Senate OKs bill authorizing president to postpone opening of classes beyond August
Don't miss out on the latest news and information.