Our Supreme Court, is it still supreme?

According to the 1987 Constitution, no person may be elected president unless he is : 1) a natural-born citizen of the Philippines; 2) a registered voter; 3) able to read and write; 4) at least 40 years of age; and 5) a resident of the Philippines for at least 10 years immediately preceding such election.

Also, according to the same Constitution, no person shall be appointed member of the Supreme Court unless he is : 1) a natural-born citizen of the Philippines; 2) at least 40 years of age; and 3) must have been for 15 years or more a judge of a lower court, or engaged in the practice of law in the Philippines. In addition, the Constitution requires that a member of the judiciary (including the Supreme Court) must be a person of proven competence, integrity, probity, and independence.

Perhaps the framers of a new charter can sort out this ridiculous situation.

Some notes on the high court:

The Supreme Court of the Philippines was established in June 1901 with Cayetano Arellano as the first chief justice. He was appointed by President William McKinley and served until 1920, making him the longest-serving chief justice. Although the chief justice was a Filipino, the majority of its members were Americans. It was only in 1935 when the Commonwealth came about that all the Supreme Court justices were Filipinos. The Supreme Court had 11 members, a chief justice and 10 associate justices. Under the 1973 Constitution, this number increased to 15, and has remained the same until now.

Since 1935, Supreme Court justices were required to retire upon reaching age 70. So far, only one justice, Florentino Feliciano, retired earlier, accepting an appointment to the Appellate Body of the World Trade Organization. Two left the Court for health reasons: Alicia Austria Martinez and Martin Villarama. The youngest individual named to the Court was Manuel Moran at age 45, while the oldest was Pedro Yap at 69.

The following are the current Supreme Court Justices: 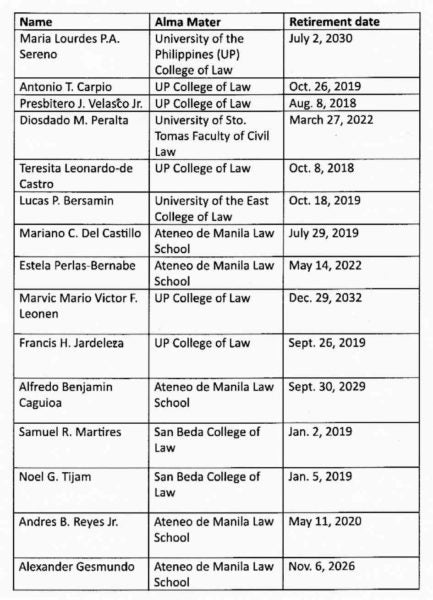 Six of the justices are from the University of the Philippines, five from Ateneo, two from San Beda, and one each from UST and UE.

Two are retiring this year — Velasco and De Castro, and six next year, 2019 — Carpio, Bersamin, Del Castillo, Jardeleza, Martires, and Tijam. This will give President Duterte 10 appointees out of 15 justices. We must not presume that all his appointees will toe the administration line all the time.

Most dictionaries define the word “supreme” as: the best, the greatest, the finest, the crème de la crème or, to use the title of one of David Halberstam’s books, “The Best and the Brightest.”

For many years, I looked upon our Supreme Court with profound respect and esteem. I thought of the members as among our best and brightest in the judicial system. Recent events however, have slowly eroded this high regard for the Court.

The spectacle of associate justices testifying against their chief in public hearings held by the House justice committee has left a bad taste in the mouth. Some of the charges were plainly personal and petty, while others were presented as possible violations of the Constitution. Whatever the charges are, the old adage about not washing one’s dirty linen in public comes to mind and should be observed by all concerned.

The sight of senior justices trooping to the Batasan to provide ammunition that could be used against their chief has diminished the ideal of a judiciary: coequal, upright and proudly independent. I cannot imagine a group of active senior generals denouncing the sitting Armed Forces chief in public, as what happened at the House hearings.

Chief Justice Maria Lourdes Sereno may be a brilliant scholar but the hearings revealed that she lacks the essential qualities of a leader, particularly one who carries the title of Chief Justice. Her lack of leadership showed in her inability to win the cooperation and support of her colleagues. Youth and inexperience combined to put her in a difficult situation, and she failed to rise up to the challenge. She was valedictorian of her UP Law Class 1984, and cocounsel with Justice Florentino Feliciano in two prominent cases won by the Philippine government. Valedictorians are often not the best of leaders.

At the Philippine Military Academy, among its valedictorians, only one became Armed Forces of the Philippines chief of staff.
Gen. Manuel Yan graduated topnotcher of Class 1941 and went on to head the Armed Forces and later served as ambassador to Thailand and Indonesia. He was my predecessor in Jakarta. Most of our AFP leaders are from the middle ranks of their respective classes. In the case of Class 1940, Gen. Ramon Gelvezon, the “goat” — last in class standing — was the first to sport the stars of a general officer.

Chief Justice Sereno will most probably be impeached by the House of Representatives. When they brought in the Supreme Court justices — and they have a number waiting in the wings — one could sense the case they were building up against her. Once the train leaves the station, the only destination left is the Senate.