Dengue kit should have been used 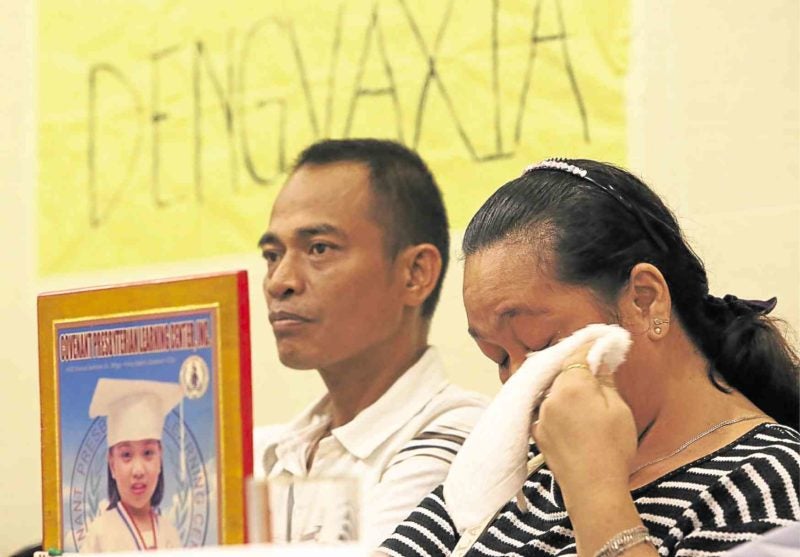 Ramil and Liza, parents of 10-year-old Anjielica Pestilos who died from severe dengue even after being vaccinated with Dengvaxia, appear at the Department of Justice on Dec. 19. —MARIANNE BERMUDEZ

I am blaming the Department of Health for using our children as guinea pigs for the clinical trials of the dengue vaccine Dengvaxia. Now that it has done vaccinating several thousands of schoolchildren aged four years and above, we cannot do anything except to closely monitor the side effects of the vaccine.

I fully blame Sanofi Pasteur for making a report on Dengvaxia only now. If this warning was given earlier, we could

As we know, there are two forms of dengue infection, the minor called dengue fever (DF), and the serious dengue hemorrhagic fever (DHF). DF lasts about five to seven days, no mortality, to be treated at home with antipyretics, while DHF has 10 percent mortality, with bleeding tendencies in the nose (epistaxis), gastrointestinal tract, gums and profuse menstruation (menorrhagia) leading to shock and sometimes death.

We have developed a dengue kit that turns positive when you had the disease before, but it cannot distinguish whether it is the minor or serious form. That’s what the DOH could have done so that we could have vaccinated only those negative for dengue. That could have solved all our present dilemma.

Past president, Private Hospitals Association of the Philippines