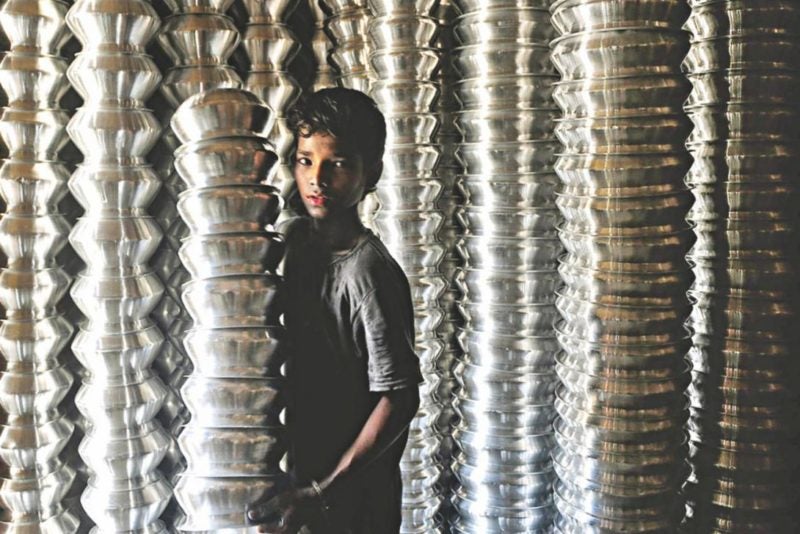 A boy working at an aluminium goods factory in Dhaka. Sixty-two million children in the Asia Pacific still work so they and their families can survive. AFP PHOTO

And although the share of persons living in extreme poverty in Asia and the Pacific has been cut by about 70 percent over the past 10 years, 62 million children still must work so that they and their families can survive.

Target 8.7 calls for “immediate and effective measures to eradicate forced labour, end modern slavery and human trafficking and secure the prohibition and elimination of the worst forms of child labour.”

The latest figures show that the SDGs, particularly target 8.7, will not be achieved unless efforts are dramatically increased. Ending modern slavery and child labour requires integrated thinking, coordinated action, effective policymaking and efficient use of resources in unprecedented ways.

Policies beyond the world of work must converge around this goal, to address the root causes of forced labour, modern slavery and child labour, and find the right incentives and deterrents to change behaviours.

A coherent strategy will include policies that touch upon fundamental rights of workers, education, social protection, labour inspection, informality, youth employment, gender, migration and labour law, while also strengthening our knowledge base through statistics and research.

Achieving SDG 8.7 will require mobilising partnerships at a new level. Partnerships that harness energy, resources and strategic vision. And that’s what Alliance 8.7 is about: A multi-stakeholder initiative, conducting research and sharing knowledge, driving innovation, and leveraging resources to accelerate efforts to achieve the target.

This objective requires the active involvement of all parts of society, of all of us: governments, workers’ and employers’ organisations, private sector, civil society and community organisations, faith-based groups, academia, media and individuals.

There are already some encouraging signs, especially in Asia which has seen the largest decline in child labour since 2012. This progress was accomplished by moving away from isolated approaches, towards policies that tackle the root causes of child labour, while strengthening countries’ legal frameworks and capacities for enforcement.

Let’s continue the momentum and ask ourselves and each other: What more is needed to ensure there’s no one left behind in our own countries and communities, in our businesses, schools, and homes?

If not us, who else?