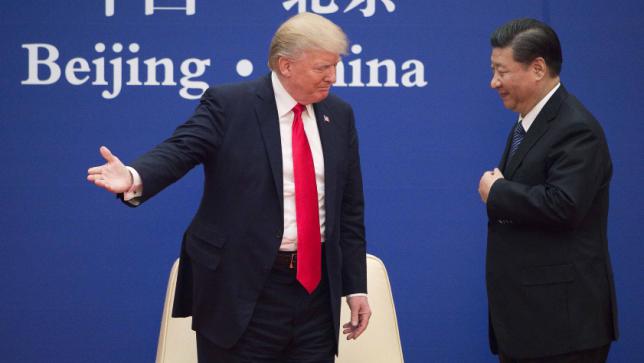 It’s a bit strange to see Chinese president Xi Jinping, of all people, defending globalization and economic liberalization in the face of resistance from Donald Trump, the leader of the capitalistic world. But here we are, getting accustomed to a scenario that would have seemed impossible only a few years ago.

In a way, Trump’s “America First” policy signifies the United States’ voluntary retreat from the global stage—in this case, the Asia-Pacific or the “Indo-Asian” region, where it has dominated for decades. For China, extending influence in the countries in Asia, which Trump’s America is poised to leave in the lurch, is a part of its grand vision to become a “global leader in terms of composite national strength.”

Trump’s five-nation tour of Asia, his first as a president, was primarily intended to address two major issues: North Korea’s nuclear threat, and trade. Trump sounded solicitous when he urged the world to back the United States in its effort to confront North Korea. “The longer we wait,” he said, “the greater the danger grows, and the fewer the options become.” When it comes to trade, however, he made it clear that no one should expect America on their side.

His contradictory messages have left allies, adversaries and even observers scratching their heads over his true motives. From the Qatar crisis to the North Korean threat, Trump appeared to contradict his own State Department. His diplomats are aware of the ground reality and want him to go about it more diplomatically. His political advisers, on the other hand, are pushing him to take a solid economically nationalistic or protectionist stance, which they believe will revive jobs and industries that the Americans lost. For a superpower like the US, sadly, trade is integral to its unified role in the world. Therefore, Trump’s approach towards Asia, which many called “transactional” and pragmatic, is caught in the crossfire between two opposite forces.

Trump’s strategy to push different policies for different nations, instead of a unified one, has already shown signs of weakness. In a bid to convince China to pressurise its ally North Korea, Trump momentarily had to tone down his trade rhetoric that casts China as the villain. While he blamed China for all the miseries of the American people during his election campaign, he now concedes, saying: “After all, who can blame a country for being able to take advantage of another country to the benefit of its citizens?” He had once branded China an enemy perpetrating “the greatest theft in the history of the world.” Now, he seems optimistic about the possibilities of a partnership between the two nations, saying, together, they could solve “almost all” of the world’s problems.

Trump’s Asia tour also exposes another of his weaknesses as a leader. Every country in the region seemed to have resorted to the most effective strategy to please him: flattery. In the South Korean legislature, for example, he was introduced as “the leader of the world.” China perhaps outdid everyone else in terms of welcoming him. But when it came to flattery, in China, it was not the host country that flattered him—let alone calling him the “leader of the world”—but the other way around.

Trump not only offered personal praise for Xi Jinping and played a video clip of his granddaughter singing in Mandarin, but also refrained from making remarks about China’s poor human rights records, a customary criticism from US presidents. The New York Times called it “a remarkable moment” when Trump “projected an air of deference to China that was almost unheard-of for a visiting American president.” In Vietnam and Philippines, too, he stressed the importance of their independence and sovereignty, glossing over their questionable human rights records or state of democracy. That’s the cost of Trump’s pragmatic and transactional approach that only cares about deals, not about exporting the American values.

In Vietnam, he went back to his “candidate” mode and unloaded his vociferous rhetoric, saying the US would never sign any region-wide trade treaty under his presidency, and America would no longer be taken advantage of.

The Asian countries, on their part, did not hesitate to make it clear that they would go ahead with or without US support. At the Asia-Pacific Economic Cooperation (APEC) forum’s summit, 11 Asia-Pacific nations agreed to press ahead with the Trans-Pacific Partnership (TPP) treaty, from which President Trump had withdrawn his country shortly after his inauguration, fulfilling a campaign promise.

In defiance of Trump’s protectionist position on trade, the 20 remaining APEC members also denounced efforts to create new trade barriers in a joint communiqué that excluded the United States.

China clearly seeks to take over some of the ground that once was under American influence. Right after Donald Trump finished his speech at the APEC summit, Xi Jinping came to declare that, “Opening up will bring progress, and those who close down will inevitably lag behind.” He discussed issues like innovation and climate change—things that, in the past, would have come from the visiting American leader.

The South East Asian countries need more than strategic security as a buffer against China’s growing influence. They also need trade incentives from the West. In the absence of America’s assurance with regard to trade, they may be driven further into China’s orbit, which is not necessarily a bad thing altogether for the countries in the region.

Yet, that is unlikely to bar Trump from claiming that his visit was a massive success. Many agree, but it’s a pity that the success is not necessarily America’s.