Vietnam’s global integration: it is now the financial sector’s turn

Vietnam has made great strides in integrating with the global economy and accomplished a great deal as its rapid economic growth in the past 30 years testifies. It is committed to opening up its finance sector, an important pillar in the economic integration process, and enhancing international co-operation.But the country’s financial integration is relatively low, though increasing, especially when compared with its high degree of trade integration.

It has been a decade since Vietnam became the 150th member of the World Trade Organisation (WTO). It now has trade relations with around 200 countries and territories and investment relations with 114.

The country has signed or wrapped up negotiations for 12 bilateral and multilateral free trade agreements (FTAs), including new-generation FTAs with large scope and high-level commitments such as the Trans-Pacific Partnership (TPP).

It is also engaged in talks for four other FTAs: the Regional Comprehensive Economic Partnership (RCEP), the Asean-Hong Kong (China) FTA, and separate FTAs with the European Free Trade Association and Israel. Deepening global economic ties will also lead to deeper financial ties. Vietnam’s tariff liberalisation through its FTAs has been vigorous, and the country is set to open up its financial services to implement its commitments as well as enable a comprehensive economic structure reform.

FEATURED STORIES
OPINION
All beside the point
OPINION
In data we trust: Robredo’s war for facts
OPINION
Masks 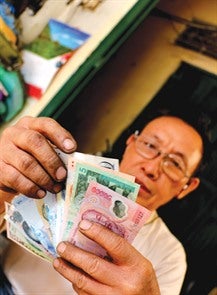 Under the FTAs, Vietnam’s commitments in the financial services sector are the same as those committed under the WTO, conforming to a ‘positive list’ approach, which includes obligations such as National Treatment and Market Access in three modes: cross-border supply, consumption abroad and commercial presence.Insurance is one of the areas of financial services in which the country has made extensive liberalisation commitments. Since its accession to the WTO, Vietnam has dismantled many barriers and stopped discrimination against foreign insurers. The country now allows access to international transport insurance, reinsurance, insurance and reinsurance brokers and advisory services.

It also allows foreign companies to establish subsidiaries to provide asset management, payments and clearing, financial information, advisory, intermediary and auxiliary services.However, the country reserves the right to impose a testing programme by capping the number of financial service providers or restricting the scope of the pilot programme to match the development level of the local banking and financial system.

In 2015, Vietnam completed TPP negotiations, for the first time adopting a negative list approach, meaning all sectors would be fully open except where it has taken an exception (non-conforming measure).Under TPP commitments, foreign financial institutions are allowed to enter the Vietnamese financial market in various forms such as by setting up representative offices, branches, joint venture banks or banks with 100 per cent foreign capital.

Though the future of the TPP is not clear after the walkout by the US, Vietnam’s TPP commitments are significantly broader than its WTO commitments as reflected in the country’s legislative developments in recent times.This was reaffirmed by Finance Minister Dinh Tien Dung when he told the APEC 2017 Finance Ministers’ Meeting late in October: “Vietnam will be more open.”

Vietnam is a rising star in the global economic map. From being one of the world’s least developed economies, it has risen into the middle-income bracket. Its gross domestic product grew at an annual average of 6.29 per cent in the past decade and is expected to top 6.7 per cent this year.

Exports are likely to exceed US$200 billion, 4.4 times the value in 2006. Meanwhile, Vietnam has attracted some $28.24 billion in foreign direct investment in the first 10 months of this year, up 37.4 per cent year-on-year.At the end of September stock market capitalisation had reached 93 per cent of GDP, the highest ever level since the market was set up in 2000.Wayne Golding Obe, chairman of the APEC Business Advisory Council, said Vietnam must be doing something right.“Vietnam is one of the fastest growing economies in the Asia-Pacific region,” he told Viet Nam News.“You’re demonstrating to the world and APEC’s members that you’re growing and you’re integrating.”

Though there are concerns over a possible contagion once a crisis occurs when a country opens its financial market, Asia-Pacific economies are nevertheless calling for deeper financial integration to boost trade and investment. Financial co-operation in the region crystallised under the Cebu Action Plan approved at the 2015 Apec Finance Ministers’ Meeting in the Philippines with four pillars: (i) promoting financial integration; (ii) advancing fiscal reforms and transparency; (iii) enhancing financial resilience; and (iv) accelerating infrastructure development and financing.

As the host of the 2017 Apec, Vietnam spelled out four priorities for financial co-operation, which received broad support from other members as well as international financial institutions: long-term investment in infrastructure; base erosion and profit shifting (BEPS); disaster risk financing and insurance; and financial inclusion.

The Asia-Pacific is arguably the most important region of our time with 21 economies including leading ones like the US, China and Japan and most dynamic developing economies such as South Korea, Indonesia, the Philippines and Vietnam.Apec’s member economies accounted for 57 per cent of global manufacturing and 46.5 per cent of trade in 2015. Greater financial integration of the region is believed to facilitate greater growth and intra-regional trade and investment as well as catalyse other areas such as expanded financial inclusion, deeper financial sector development and increased infrastructure financing.

As a supporter of global economic integration, Vietnam in January 2016 adopted an overall strategy for international integration through 2020 — with a vision to 2030 — with the objectives of enhancing the country’s aggregate strength, taking full advantage of favourable global conditions to turn Vietnam into a modern industrialised country, improving living standards, and raising the country’s global profile and prestige.

With other Apec member economies, “Vietnam is always looking for opportunities for co-operation in the financial sector within the framework of bilateral and multilateral FTAs,” Vu Nhu Thang, director of the Ministry of Finance’s international co-operation department, said.

Within the bilateral framework, Vietnam has actively co-operated with other economies in areas like taxation and customs.Vietnam has signed 76 agreements to avoid double taxation, many with Apec member economies. A similar agreement with the US is awaiting ratification.

787 earthquakes recorded in 24 hours due to restive Taal Volcano