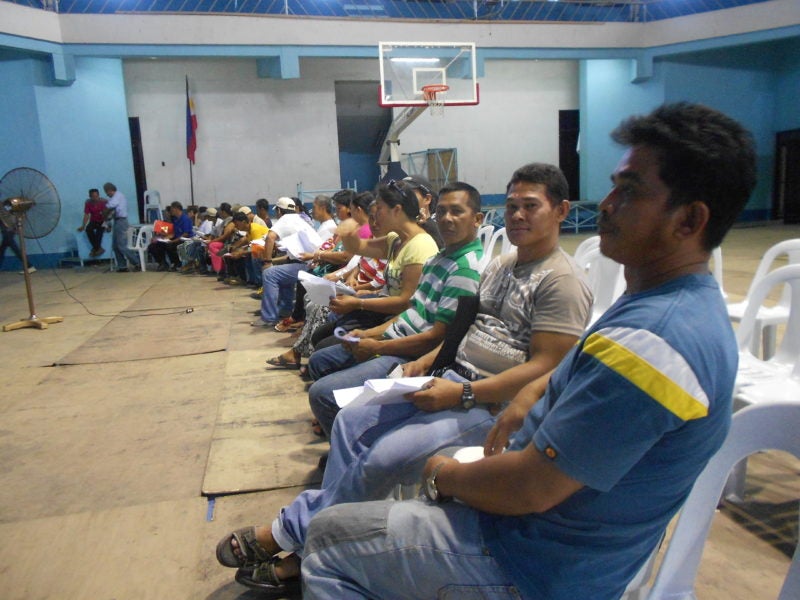 MARTIAL LAW VICTIMS Mindanao-based victims and relatives of martial law atrocities during the Marcos dictatorship await compensation claims awarded by a US court at the Almendras gym in this photo taken in Davao City in 2014. —GERMELINA LACORTE

(Editor’s Note: The writer is the director of the Bangsamoro Youth Affairs of the Autonomous Region in Muslim Mindanao.)

I always feel sad when I hear stories from our elders of how Ferdinand Marcos’ martial rule was implemented in Moro provinces, especially in Sulu where my parents were born and raised.

There are wounds left unhealed in many young Moros like me whose families suffered during those dark years.

It came suddenly, they said.

Static was all that came from the transistor radio.

After a few hours, the rumor mill came out with information about arrests, abductions, raids and even deaths of local people.

All these reports, however, were unverified.

Many of those stories would probably be tagged as “fake news” if they were told today.

Those stories, however, have been instilled in our people’s memory, whether they lived in the cities or in the countryside.

The lack of access to reliable news outlets and the abuses by the military resulted in chaos in some areas in our region.

The sorry situation was compounded by reports of abuses by the soldiers who replaced the civilian authorities as local government administrators.

People no longer felt secure even in their homes. Many chose to relocate to places they  deemed safer.

My family, I was told, moved from town to town and province to province.

In the 1970s, escape from martial law abuses depended on family resources: Those who could afford it went as far as Sabah in North Borneo, just a few hours by boat from Western Mindanao’s island provinces.

The less fortunate stayed in their hometowns and faced the risks.

We Moros have faced discrimination and prejudice from our fellow Filipinos for centuries—so much that we constantly feel the distrust of our non-Muslim neighbors even as we religiously follow the golden rule.

During the martial law years, soldiers from the north who were dispatched to Western Mindanao were generally hostile to us and insensitive to our religion, as well as our customs and traditions.

Martial law was declared to suppress rebellion from the political left, not by the Moros, yet we were villains in these people’s eyes.

Secondhand information reminds many of us of unfortunate incidents that involved our families.

There were so many forced separations, even though most of us were never part of the political opposition to Marcos.

In a nutshell, those of us who were born after martial law were partially deprived of our identity: We lost track of family members, of their whereabouts, of who are still live, and of who have died.

Yes, the people in the capital suffered under martial law.

So did the people in the countryside.

So did the Moros, who already had to live under an insensitive and hostile government.

Remembrance is the most effective act of defiance a people can undertake.

So we continue to remember the most agonizing things so they will not happen again.

I remember the story of the Malisbong massacre, the one told in whispers among us Moros for four decades.

It is one of the stories that affected the Moro communities strongly enough that it has contributed to what the press has called the “Moro separatist” movement, which has taken up  four decades of our country’s history.

It is a story of how badly being seen as “other” and “lesser” can turn out.

September 1974 was the holy month of Ramadan for Moros. It also marked the grim days when some 1,000 men from Malisbong town and its neighboring villages in Palimbang, Sultan Kudarat province, were killed.

That was not all: About 3,000 women and children were forcibly taken to naval boats docked nearby.

What has come to be called  the Malisbong massacre is the story of how genocide came to the Moros of these towns wrapped in the cloth of “pacification.”

The foreshadowing of these dark days that we remember  was the sighting of helicopters hovering over Malisbong, with one dropping pamphlets speaking of peace and loyalty to the government.

The next morning, Sept. 24, some 100 heavily armed men entered Malisbong, as part of the “legitimate” military operation against rebels who the government said had infiltrated communities in Central Mindanao.

“Pacification” meant the men of Malisbong and the nearby villages were forcibly sent to the Tacbil mosque.

It meant the women and children of these communities were to be dragged to warships docked nearby—for “interrogation.”

“Interrogation” was, perhaps, code for rape. Girls and grandmothers alike were raped on warships and were released the next day.

Some of those girls and women lost their minds.

“Pacification” was a euphemism for mass murder during those martial law days.

It was a clean, pretty term for burning 300 houses to the ground.

It was verbal camouflage for the point-blank shooting of boys as young as 11 and men as old as 70 inside a mosque, a place of worship that the armed men desecrated.

“Armed men” was, of course, code for members of the Philippine Army, whose sworn duty was to protect Filipinos from external aggression and threats.

So how were the Moro villagers of Malisbong and nearby towns a threat? Because they were seen as outsiders.

The Tacbil mosque still stands, a silent witness to the carnage wrought upon peaceful and noncombatant Moros.

The massacre claimed the lives of 1,500 men, women and children, all of them Moro.

And the nation kept silent for four decades, not even uttering the code words “pacification” or “interrogation” in the context of the Malisbong massacre.

The rapes and the mass murder, the desecration of our house of worship, and the gutting of property by fire in Malisbong were sponsored by the state.

These brutal acts against the people of Malisbong were carried out under the auspices of then President Ferdinand Marcos.

Forty-three years later, the survivors and the surviving relatives of those killed without mercy still cry for justice.

This was martial law in Central Mindanao. This is why telling Moros that Marcos was a hero is a grave insult to the Moros.

Two years ago, the Commission on Human Rights officially recognized the Malisbong massacre.

Government representatives apologized to the surviving relatives of the tortured and the slain.

The victims of the atrocities were acknowledged by virtue of Republic Act No. 10368, the Human Rights Victims and Reparation and Recognition Act of 2013, a piece of legislation that aims to provide remuneration to the families of all the victims of martial law abuses.

We need to stop speaking in code. We must remember, for those who do not remember their history are doomed to repeat it.

This must not happen again. Never again. We must remember. —CONTRIBUTED