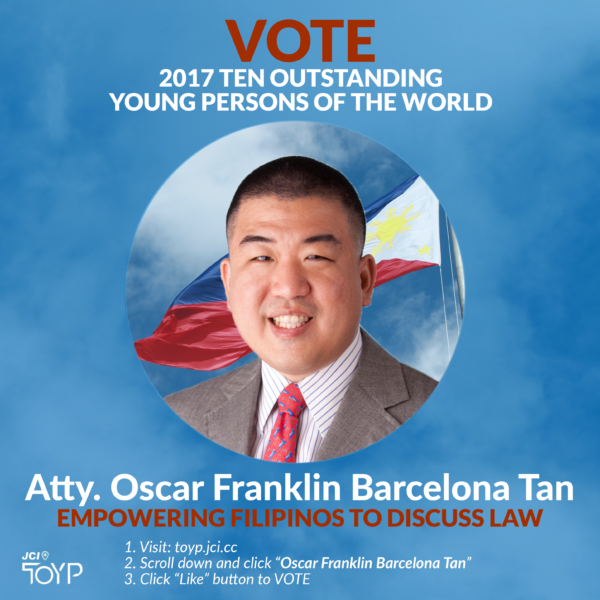 SINGAPORE — I have five days — until Aug. 25 — to become a social media influencer. And 21-year-olds are schooling me.

Rep. Miro Quimbo once cajoled Facebook friends to like his son’s photo in a school contest. It was embarrassing, he said, to get thousands of votes in an election but not dozens of likes on Facebook.

I clicked, liked, and sent him snarky encouragement.

I am representing the Philippines in the online voting for the bombastically-named “Ten Outstanding Young Persons of the World” (TOYP) of Junior Chamber International, the global round of our TOYM.

It is more difficult than avoiding “Game of Thrones” spoilers, as my relatives and classmates now know!

My advertising friends said to make a Facebook page and ask friends to share. Or ask all my groups to endorse. Or go on TV and ask people to vote.

Joshua revamped the Ateneo campus magazine now called Elements. I founded it as a freshman in 1997, with now Finance Undersecretary and tax whiz Karl Kendrick Chua as associate editor, a side project while a Guidon (college paper) editor.

Over coffee, we would discuss converting the magazine to digital and the hassle of all the girls chasing him. He published “F. Sionil José and the crime of being born” in Inquirer in 2015. I took selfies with his staff for Elements’ relaunch. I wrote his first job reference letter.

Joshua immediately opened my public Facebook page and lectured how I should know my core readers are 18-39, slightly more male, and read from 4 to 9 p.m. (They never taught this in UP Law!)

He rattled off bullet points from demographic bailiwicks to personal brand. He made four versions of a square Vote Oscar DP (default picture), separately optimized for Facebook, Twitter, Instagram and Viber (the last because, “Oh, old people like Viber”).

I called his deputy Robert Bryan Cuartero and got more lectures on proper hashtag length (hashtag, I knew that). He and I visited museums and went over master’s degrees.

I saw them announce events like “RecWeek” by simultaneously changing profile pics to the event poster. Their happy birthdays were simultaneous profile pic changes to spoof photos of the celebrant. And I knew Joshua’s staff truly respected him when they gave him his own hashtag, #TheJoshua.

The leaders I admire most are all generous to those starting out. So I try to pay it forward, try to mentor those passionate about writing and law. But I never expected a mentee to save me one day. Jack Ma did emphasize how crucial it is to learn from those younger than you.

This funny online voting reminded me that this column is built on private messages from millennials, from what students think of the Edsa Revolution to my UE Law students’ dream internships with the Solicitor General’s elite.

I was going to write about Kian delos Santos. But I received moving essays on him from Don Randolf Sanchez (16, Ateneo high school) and Jedd Ong (20, UP Business Administration). I smiled and forwarded them to my editor, realizing that nothing captures the horror of a 17-year-old shot by police better than the diamond-in-the-rough prose of another teenager.

But please share Joshua’s DP from my Facebook page. If my parents learned to spam, so can you!

You and Miro Quimbo have until Aug. 25 to beat the Nigerian, the Bulgarian and their thousands of likes! #PinoyPride