The Bells of Balangiga: a second look at history 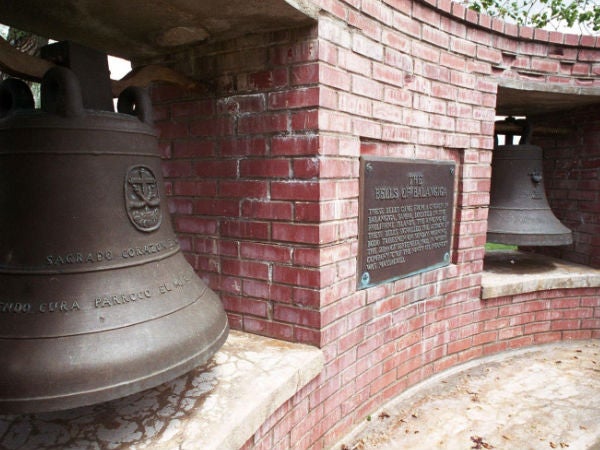 As President Rodrigo Duterte, in his second State of the Nation Address delivered last Monday, mentioned anew another American atrocity not widely known in Philippine history books, we come again to confront and learn of this controversial event that shaped our history. What are the Balangiga Bells? Why must these bells be returned?

Let’s go back to 1901. The Philippine-American War was almost over. The American capture of President Emilio Aguinaldo in March brought shockwaves to the Filipino forces fighting the Americans. It ended any large-scale organized resistance against the Americans, with the First Philippine Republic effectively capitulated. Surviving Filipino generals and famished, diseased-ridden Filipino soldiers surrendered one by one. Fighting was greatly reduced. To borrow the words of writer Mark Twain, the “eagle has put its talons” on the Philippines.

The Philippines then was administered by the United States both through civilian and military leadership. The civilian American governor-general, William Howard Taft (who in the future would be elected as U.S. President) administered the “pacified” areas in the country, while those still under the state of “rebellion” were under the military governor-general, Arthur MacArthur (the father of Douglas MacArthur). Taft was more conciliatory towards Filipinos that it led to an intense conflict between him and MacArthur. With peace already in arms reach throughout the islands, U.S. Secretary of War, Elihu Root, saw this as an opportunity to make a change in bureaucracy. He relieved MacArthur and gave the military governor-general position to Adna Chaffee, whose record boasted an administrative experience during the Boxer Rebellion in China. Chaffee was placed there in the hopes that the relationship between civilian and military administrations be mended. But it was bound to fail.

This was because all American military governors assigned to the Philippines, including Chaffee, seemed to have a low regard on Filipinos (a prevalent view among the American public, esp. in the army), seen to be unruly and in need of force and discipline to introduce to them democracy and “civilization.” Furthermore, many of them in the ranks fought against the indigenous Native Americans during the U.S. westward expansion, hence their condescending and racist view on non-whites. Taft vehemently disagreed with Chaffee’s policies and the way the army dealt with Filipinos. Taft further infuriated the army by inviting some Filipino leaders to the table.

The American media had also been covering the Philippine-American War, but only rarely getting statements and interviews from the First Philippine Republic at its heyday. Many were clearly biased for U.S. interventionism but a few were for Filipinos, thanks to the exposes and clamor made by the Anti-Imperialist League in the U.S. However, the American military had imposed a news blackout to the media hence most of the media’s information were filtered and only relayed to them by the military. Indeed, Chaffee himself told journalist Joseph Ohl:

“If you should hear of a few Filipinos more or less being put away, don’t grow too sentimental over it.”

As I mentioned, Chaffee had an extensive military experience in China. And there, under Chaffee were the “C” Company of the 9th U.S. Infantry Regiment. The contingent helped in the capture of Manila from the Spanish in 1899, and were also sent to China to help rescue foreign nationals from the Boxer Rebellion. By 1901, they were assigned in a small town in Samar, called Balangiga, and having arrived there in August, associated themselves with the locals.

“Tensions rose when on September 22, at a tuba store, two drunken American soldiers tried to molest the girl tending the store. The girl was rescued by her two brothers, who mauled the soldiers. In retaliation, the Company Commander, Capt. Thomas W. Connell, West Point class of 1894, rounded up 143 male residents for forced labor to clean up the town in preparation for an official visit by his superior officers. They were detained overnight without food under two conical Sibley tents in the town plaza, each of which could only accommodate 16 persons; 78 of the detainees remained the next morning, after 65 others were released due to age and physical infirmity. Finally, Connell ordered the confiscation from their houses of all sharp bolos, and the confiscation and destruction of stored rice. Feeling aggrieved, the townspeople plotted to attack the U.S. Army garrison.”

Was the mauling of the American soldiers justified? Let us put things in perspective. This injustice of molesting a girl were, rightly put, distasteful to the brothers who only defended the girl’s honor. But with the excessive punishment on the men of the town after the incident, it was like rubbing salt on the wound. One must remember that Filipinos at the turn of the century had their own functioning government until the U.S. wrested control by force. With full attributes of a legitimate State, the First Philippine Republic had its own three branches of government, a constitution, a territory administered from the capital city of Malolos, complete with its own army and ranks. But the U.S. subjugated this government, captured its president, called the Filipino army as rebels. Add the violation of the girl’s womanhood, and the excessive punishment endured by the 143 Balangiga men. These were, rightly put, unjust and unforgivable in the eyes of the townspeople. So the people hatched a plan.

On the Friday of Sept. 27, 1901, it was the town church’s anniversary and fiesta. Various people from nearby towns came. Since the Americans were already informed they never noticed anything out of the ordinary. In the afternoon, there was an afternoon procession of at least 50 people, most of whom were women. The 6 men carried a statue of the interred Christ. Turned out that the women in the procession were in fact men disguising themselves as women. In the novena at night, the cross-dressed men and other conspirators prayed for the success of their plan. Women and children were already leaving the town after midnight, and the American troops didn’t notice.

In the early morning of the 28th, 6:00 a.m., the contingent assembled at the town plaza. A few moments later they went back to their barracks and tents focused on breakfast. Valeriano Abanador, the leader of the conspiracy and the police chief of the town, were with the Americans when he suddenly grabbed a gun and shouted, shooting the gun and hitting one soldier. A second later, the bells of the Balangiga Church was suddenly rung, signaling the simultaneous surprise attack of the men of the town on the contingent. From the convent to the barracks, the Americans were hacked to death by bolos, while a few American soldiers shot Filipinos with considerable heavy casualties. Out of the 74 American soldiers, 34 survived, 8 of whom died of wounds. Of the unnumbered Balangiga men who took part in the attack, only 28 were killed. The American survivors fled to Basey, Samar and Tolosa, Leyte through 5 boats (2 of which capsized). Some of the townspeople returned to bury their dead, only to leave the town again deserted.

The Company G of the same contingent, from Tacloban went to Balangiga and saw fate of Company C. They burned the town and everything in it, including the church, and took the three bells of Balangiga with them.

Continue reading about the Balangiga Bells at Indio Historian.

Furkan Korkmaz gets hot to lift 76ers over Bulls