Is the UP ‘female oblation’ fake art?

Amidst the euphoria of last Sunday’s University of the Philippines Diliman graduation, some allege that the gigantic sculpture just unveiled there is a copy of a Dutch work. Is this crab mentality, a lack of critical thinking, or simply insecurity regarding Philippine artistry?

The Oblation statue remains UP’s iconic symbol. National Artist Guillermo Tolentino captured the UP spirit in a 12-foot concrete sculpture of a nude, muscular man with arms outstretched, staring at the heavens. It has inspired decades of iskolar ng bayan since its creation in 1939. 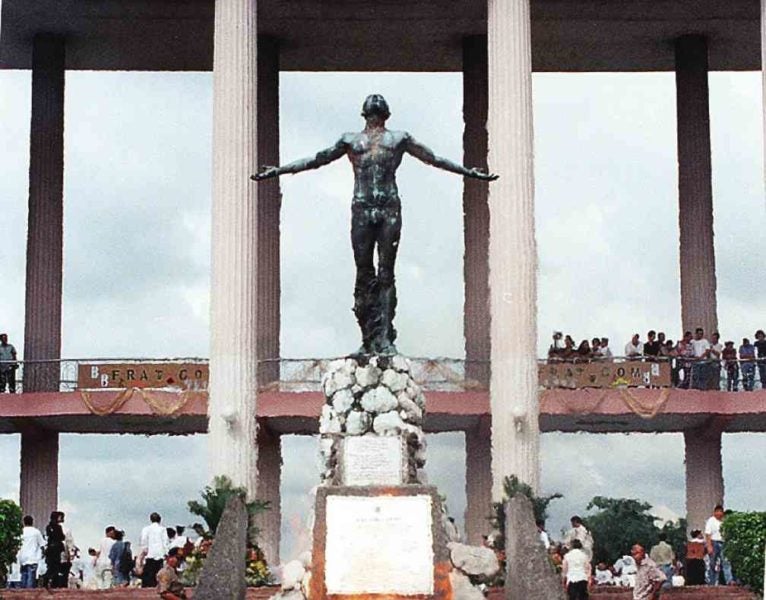 Ferdinand Cacnio’s “Uplift” beautifully takes off from this icon, with its own distinct theme. A 7-foot brass lady floats in front of UP’s Villamor Hall, arms outstretched and clearly alluding to its predecessor. Her hair hangs underneath her head, hiding the statue’s cleverly disguised base without breaking the illusion of levitation. 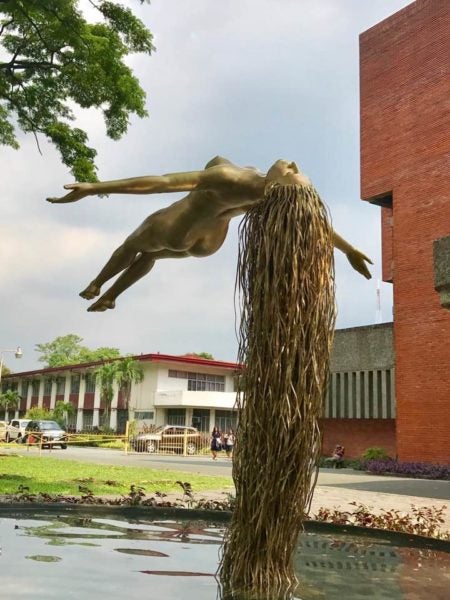 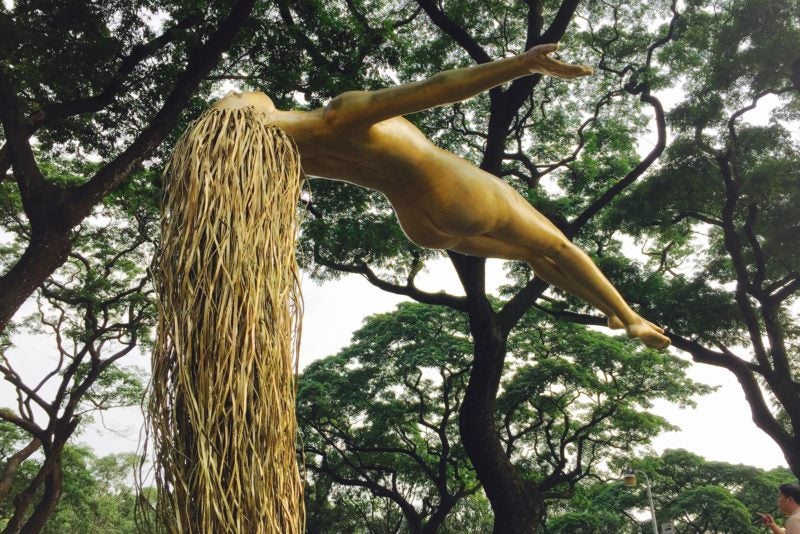 Ferdie explained to me that “Uplift” channels what he thinks is the most important quality of a UP education: openness. One becomes excellent by opening oneself to all forms of knowledge and to students from all walks of life. “Uplift” and its open arms welcome all these to the campus. Some critics claim, however, that Uplift was plagiarized from “The Virgins of Apeldoorn,” three huge bronze statues of floating girls installed in Rotonde in The Netherlands by Dutch sculptor Elisabet Stienstra in 2001. One of the virgins lies flat with arms outstretched, raised from the ground by her hair and a cloth draped over her pelvis. 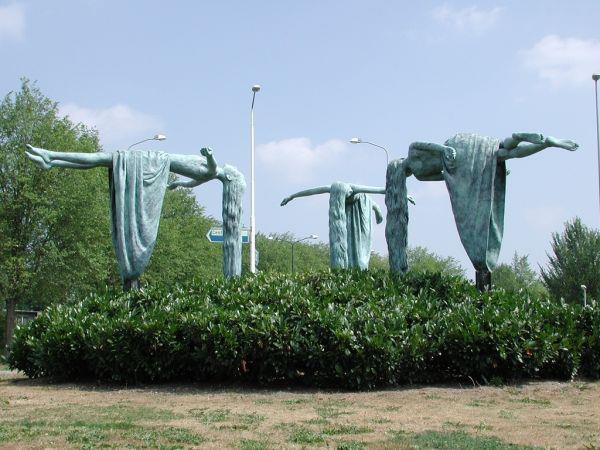 To cry plagiarism, however, because one sees two large metal sculptures of floating girls both supported by their hair is as useful as saying a Ferrari and a KIA Pride are both cars.

I happen to know Ferdie and have had the pleasure of discussing what drives his sculptures. He is both a UP engineering graduate and a dancer, and is fascinated by both structure and capturing the elegance of the human  body’s motion in metal.

His delicate, flowing treatment of the female body is evident in Uplift, as it has been since he began sculpting dancers and ballerinas in 2005.

Take a look at “Cristina” from Ferdie’s 2011 exhibit “Connecting with Greatness”: 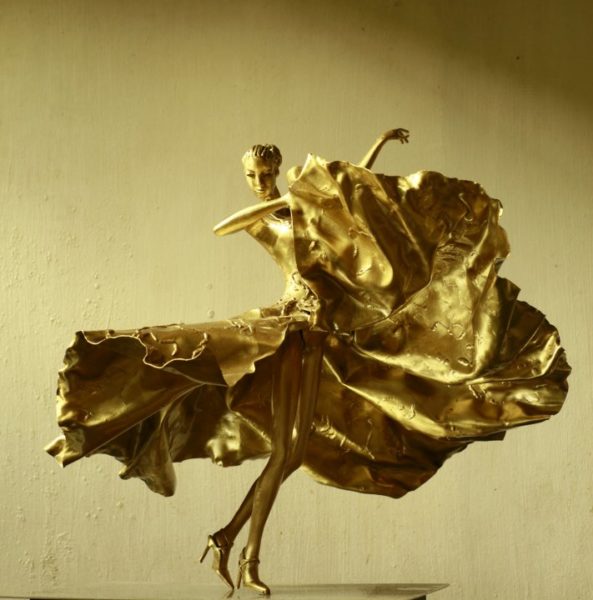 Especially if one has seen Ferdie’s body of work, one readily spots the differences. The virgin is seemingly flat on an imaginary surface, with its shoulder blades, backs of its palms, backs of its thighs and its ankles almost level. Uplift is rising up, as though pulled skywards by an invisible harness. Its hands and feet float free.

The virgin seems androgynous, with thin limbs and a flat torso, as though the artist chose to emphasize the concept of a floating girl over the girl itself. Uplift does the exact opposite, and celebrates the figure’s sensuousness as powerfully as Ferdie’s dancers in mid-twirl. It carefully follows the female form: the elongated neck, the curve of its breast, the bump of its ribcage, the powerful buttocks and thighs. I saw several female graduates react to Uplift with the same glee they felt coming out of a Wonder Woman screening.

The floating woman is arguably Ferdie’s second most popular theme, after his dancers. He has been sculpting them since 2007, shortly after his career in art began.

Take a look at this small tabletop floating nude he created in 2009: 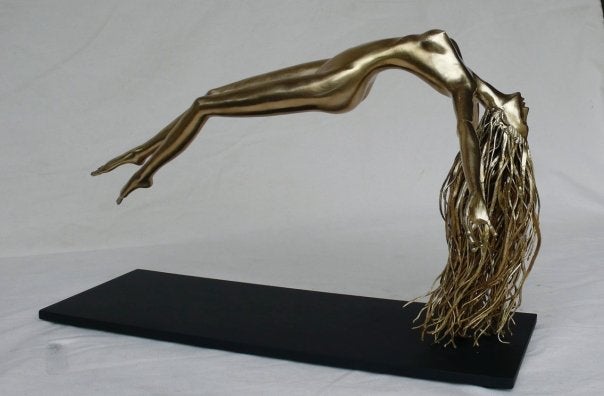 In 2010, U-Boat launched an exhibit around its oversized watches and Ferdie’s floating women. Here’s a sample: 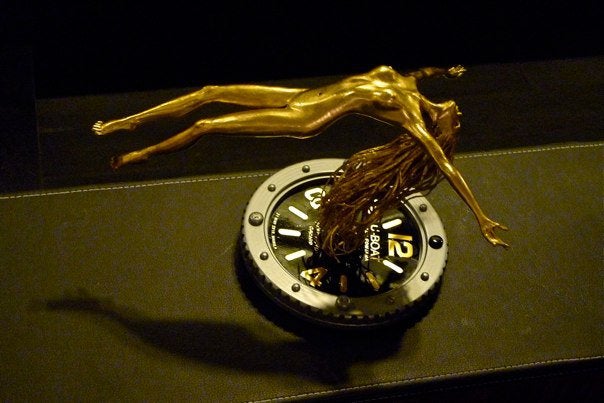 Here’s another from the 2010 ManilArt festival that already channels the Oblation: 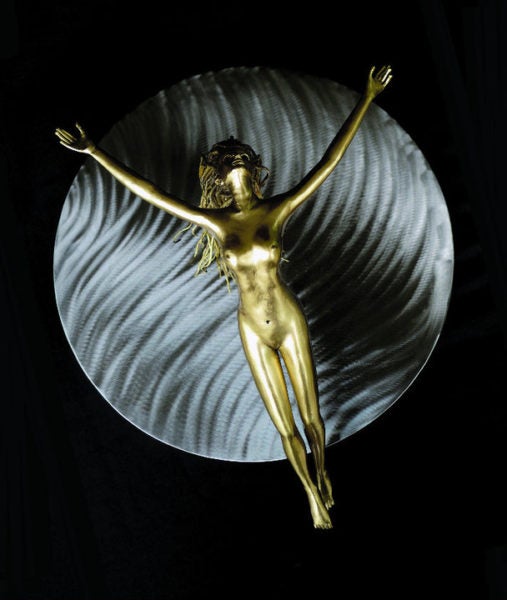 And here’s a 45-inch leaping woman “Surrender”, also supported by her hair, from 2011 ManilArt: 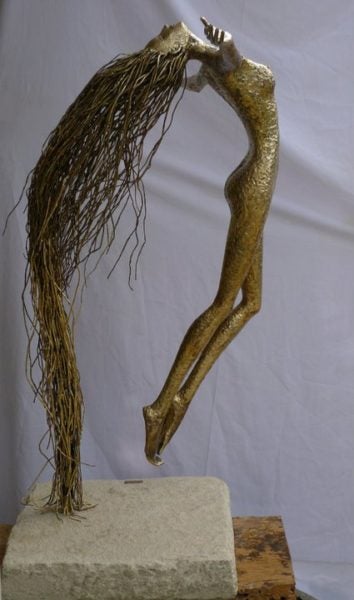 Ferdie said he has never heard of the Dutch Virgin until someone cited her in reaction to Uplift. This is readily believable because the Virgins are not in central Amsterdam, but in Rotonde. There is hardly any mention of them or their creator in English language media, and they do not appear installed in a place as prominent as the main UP campus.

I have been to Amsterdam and its museums, and no one over the years mentioned the Virgins to me. I went to Stienstra’s website and her CV does not even emphasize the Virgins. If one searches on Google now, the most prominent mentions of the Virgins are in relation to Ferdie.

In both art and intellectual property law, one must understand that creatives build on concepts that have evolved for centuries. One may copyright a specific execution of a concept, but not the concept itself. Otherwise, all literature would be theft, and every tale of love, revenge and heartbreak would be dismissed as a recycled idea.

In the visual arts, everyone is free to tackle a familiar concept in his own way, from the mother and child to the vase of flowers, or in more contemporary social realism, the mysterious figure in a barong that signals a politician or the Ifugao bulul (rice guardian). In this case, surely the idea of a floating female is a general enough concept, and there would be no other way to support such a statue if nude other than to hide the base in the hair.

Indeed, Merlito Gepte, winner of the 2013 Metrobank art award for sculpture, posted a photo of a floating lady also supported by her hair in his workshop. He said he should be accused of plagiarism too: 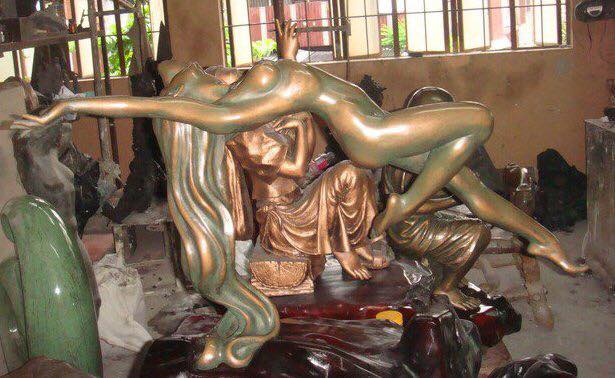 The lesson of Uplift and UP must be to revel in what the Filipino artist can create and have more faith in our ability.

Here are more of Ferdie’s works: 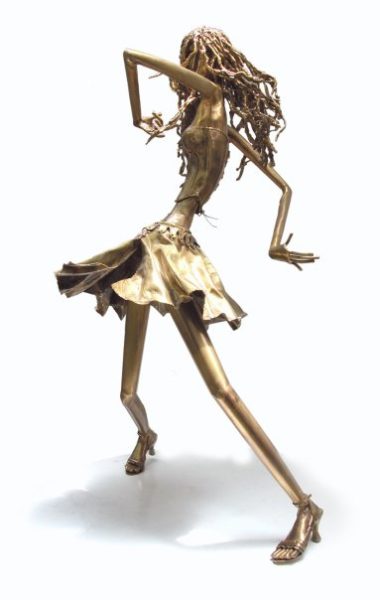 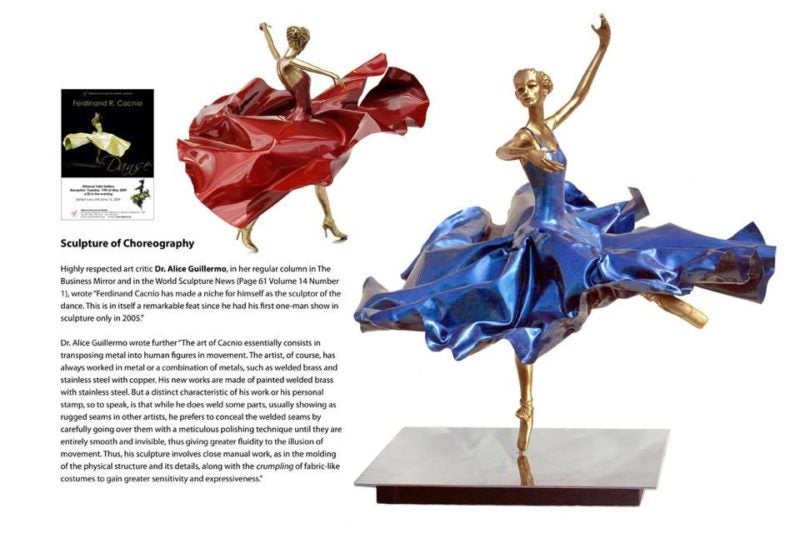 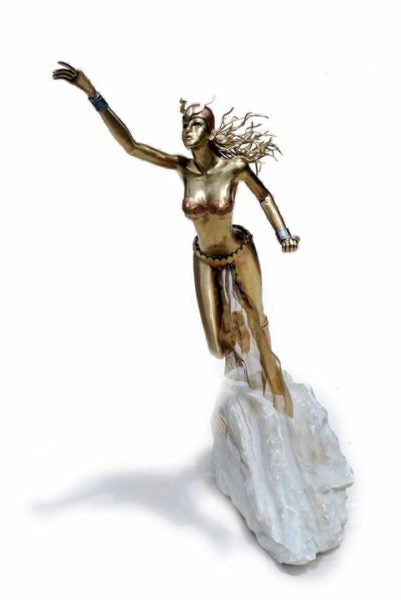 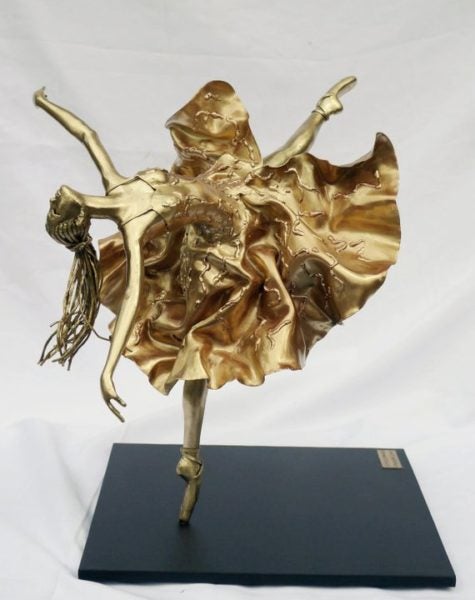 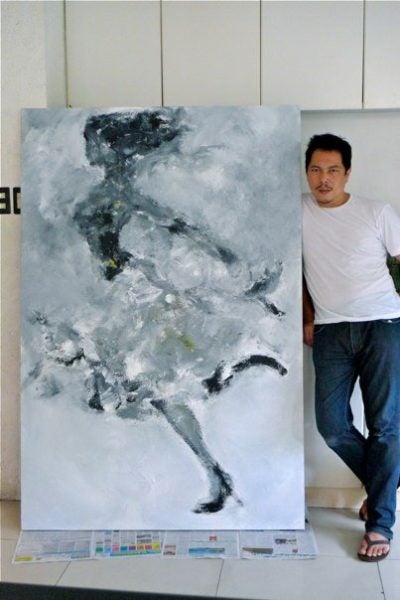 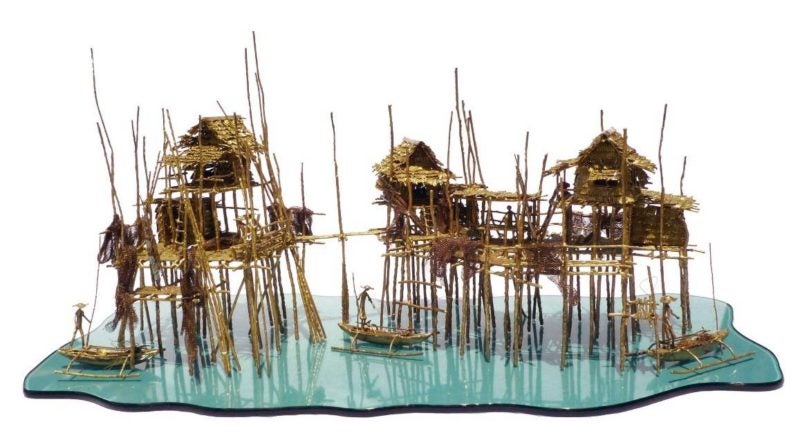 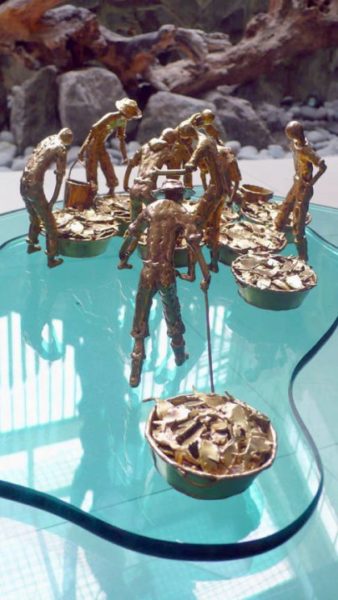 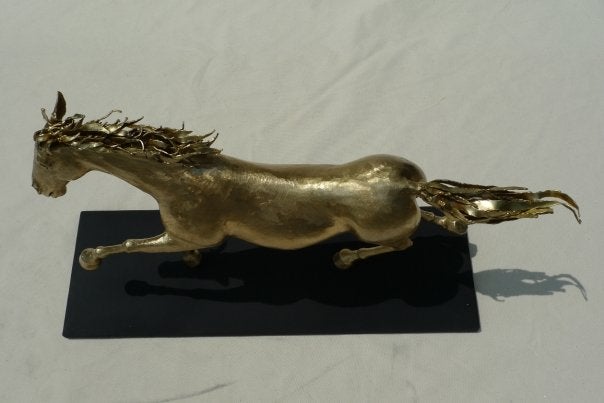 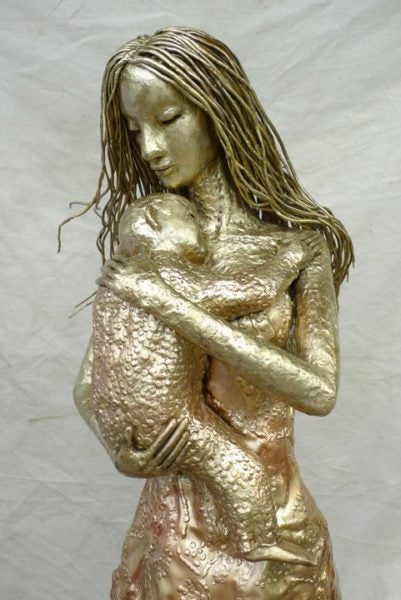 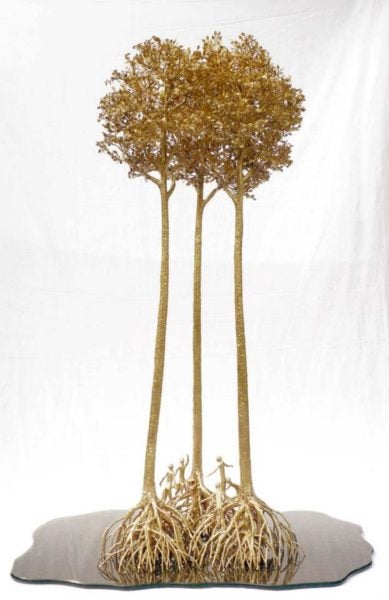 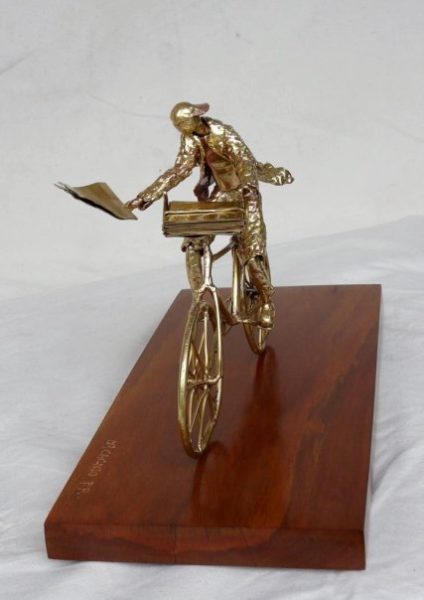 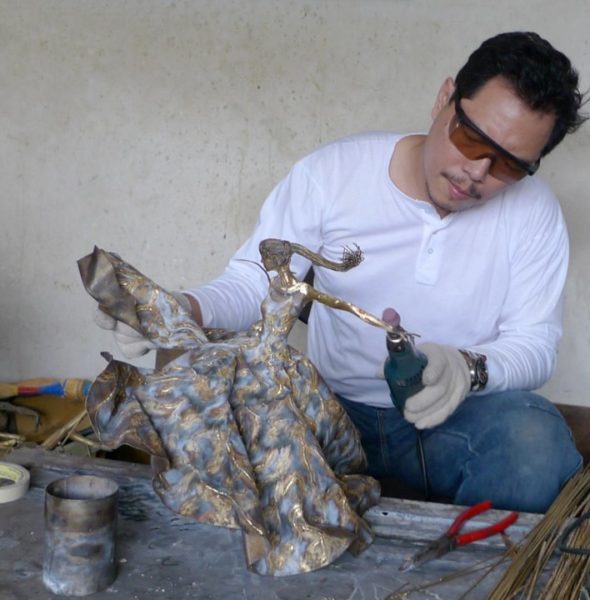 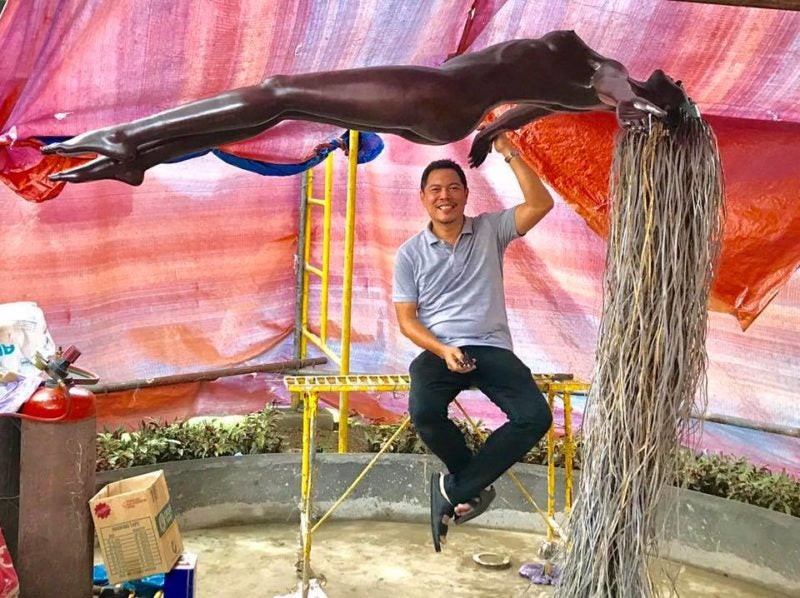 (unless specified, all photos are used with permission from Ferdinand Cacnio’s Facebook page)

Read Next
Tourism threat?
EDITORS' PICK
Experience clearer calls nationwide with Smart VoLTE
Cagayan gov endorses 10-day ECQ in Tuguegarao due to COVID-19 surge
No warrantless arrests despite DND-UP accord termination, says PNP spox
Biden team says US will not lift travel bans, despite Trump statement
Driving can be even more rewarding this New Year — here’s why
New Year, New Rediscoveries
MOST READ
Proposed toll for newly opened Skyway 3 ranges from P110 to P274
‘Hotbed of recruitment’: Lacson backs termination of UP-DND accord
Duterte to firms: No franchise until you settle your accounts with gov’t
3 things Leni can learn from Biden’s victory
Don't miss out on the latest news and information.

TAGS: female oblation, Oblation, University of the Philippines, UP, Uplift

No warrantless arrests despite DND-UP accord termination, says PNP spox

‘Hotbed of recruitment’: Lacson backs termination of UP-DND accord