Review: ‘Can We Still Be Friends?’ is a standard rom-com with a few delightful tricks | Inquirer Opinion
Close
menu
search

Review: ‘Can We Still Be Friends?’ is a standard rom-com with a few delightful tricks 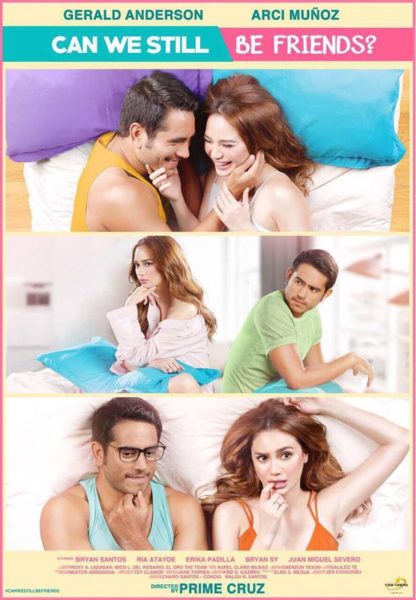 To provide an upfront summary of this review: “Can We Still Be Friends?” is your standard rom-com, cast in the same old Star Cinema mold, with a few nice tricks up its tried-and-tested sleeve. That this movie is not groundbreaking should not be taken against it—and the story itself gives us a reason why.

Before anything else, let us mention the film’s worst moment: a minute or so is spent on product placement in the middle of the action. It is not as blatant or tacky as certain MMFF entries have been, but neither is it subtle. Jarring advertisements like this destroy storytelling flow. At least, the scene does not take too long. It cuts out before audiences can start hurling tomatoes at the screen.

“Can We Still Be Friends?” is made by the same core filmmaking team behind crowd-favorite indie Sleepless, and the horror-romance Ang Mananggal Sa Unit 23B (AMU23B), also an indie. Both films were entries at different editions of the QCinema Film Festival; “Can We Still Be Friends?,” therefore, represents this filmmaking band’s crossing into mainstream cinema. The team’s past work provides a convenient standard against which their latest work can be measured.

Cinematographer Tey Clamor and production designer Nestor Abrogena provide the most consistently pleasant aspect of these films: visual appeal. “Can We Still Be Friends?” overflows with carefully composed shots and some neat, detailed sets. You’d probably want to live in Sam (Arci Muñoz) and Digs’ (Gerald Anderson) cozy condo unit after seeing this movie. The camera framing is always attractive, and often meaningful—like in that scene when Digs has to leave Sam alone in her home, and the shot is split in half between the loneliness of Sam in her room and the stark emptiness of the kitchen as Digs exits.

Director Prime Cruz does what he can with the love team given to him. Muñoz performs well: she is alternatingly affecting and bubbly, depending on the mood required by the scene, but always effectively animated. Anderson, on the other hand, is fine in moments calling for restraint, but is a little too stiff in crucial scenes demanding force. Brian Sy, who plays Dino, Digs’ comic-relief best-buddy, is decisively more fluent. The most notable of the rest of the ensemble is Juan Miguel Severo as JM, Sam’s gay best friend, who seems purposely cast in this film for a climactic voice-over montage, where he delivers the kind of stirring spoken-word poetry that made him famous.

Sam and Digs’ antics are not entirely endearing in this film. It is hit-or-miss, so if you are not already a fan of the Arci-Gerald love team going into this movie, then you might not be convinced of their chemistry. When we do root for the couple’s getting back together later in the movie, it may be due more to a general desire for happy endings than a particular, earned chemistry between the leads.

On the bright side, “Can We Still Be Friends?” proves that Prime Cruz is at his best when his scenes are wordless.

Continue reading the rest of the review at Reverse Delay.