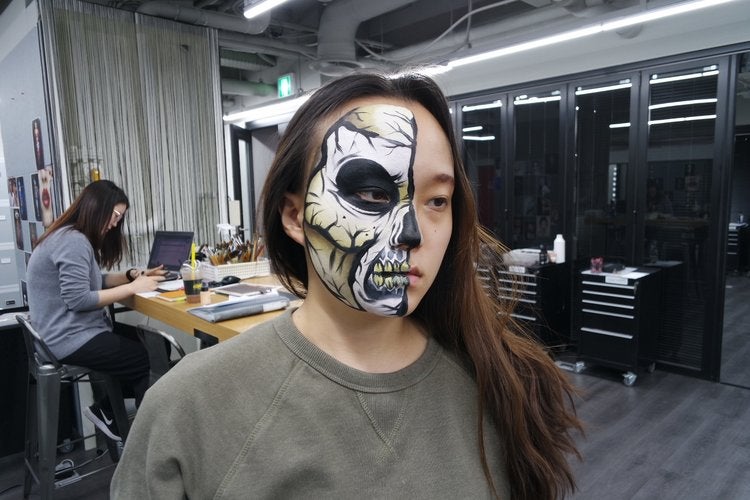 Photo from Kristel Yap, taken from the original article on Project Vanity

We’re all beauty enthusiasts in various stages of our love affair with makeup here at Project Vanity. Some are just starting to dabble, some are already skincare and makeup junkies, and others have turned their passion to a vocation as professional makeup artists. Studying beauty in a formal setting, investing in a kit, and leveling up your techniques are no easy tasks but imagine doing all of that in a foreign country where the language is also totally different from your own!

If you’re curious to know what that would be like, we’ve got a story to share. Meet Kristel Yap, a.k.a. Tellie of the blog Beauty By Tellie, who has just graduated from a pro makeup artistry course in South Korea. SoKor as you know is the beauty capital of the world so we were dying to know how and what she learned there! We chatted with Tellie about making the big move, a first-hand look at K-beauty culture, and of course, the best beauty tips she’s learned from her stay.

The anatomy of the shift

Tellie likens her decision to study makeup abroad to a tidal wave. From believing that life was just about studying, finishing school, and settling into a boring job, she realized that her musings were those of a school-sheltered youth. Kristel explains, “What hit me like a tsunami in the open sea was how uncertain real life actually is. A job was totally not at all like [being in high school or college].”

In an attempt to inject some much-needed clarity to the situation, she opted to give herself a gap year after college to explore her options. While she admits that there were no ocean-deep personal revelations, it was still a precious period of time. “I deeply cherish that I had this luxury of pulling myself away from that slowly suffocating mindset of limiting my own options to what everyone else was doing. Everyone in my batch was getting jobs left and right—and in multinationals, to boot. It was so easy to feel inferior and compelled to prove myself in the same field, regardless of my actual interest in those jobs.”

After her self-imposed deadline arrived, she decided to eschew an extension in favor of landing a job. She reasons, “If my choice wasn’t clear to me by this time, then I would see the world and make it clear to myself.” Thus she found herself working a brief stint in PR and then trying her hand at the family business. And while it was a comfy job with great hours and benefits, she found herself wanting more, four years down the line.

“I started beauty blogging,” she says. “I figured the way to be happy in life is to take care of both basic and high needs. I loved makeup, so I started there. It was hard work and a lot of the internet stuff is so uninteresting to me but I slowly realized what life should have been like. Through my blog journey and the various beauty bloggers I’ve met, I learned that it is possible to do just what you want and nothing else. I’ve met freelancers and creatives who are, SHOCKER, not paupers and happy with their lives. Successful people were always going to be successful, and deadbeats like my ex were always going to find something to blame. So an important question came into my head: Kristel, what can you stomach to do every day, even when your stomach has nothing in it?”

It wasn’t a spur-of-the-moment fancy that convinced Kristel to study abroad. The notion of leaving the Philippines wasn’t even in her radar initially but after narrowing her local options down to two schools and finding out that their beauty education philosophies weren’t exactly her cup of tea, she decided to make the selection based on what beauty theory she liked and which school best catered to it. She recalls, “It was a very long decision, first deciding between focusing on Western or Asian beauty. Western beauty has a richer history and has been well-developed through the years but fashionable cities like Paris and LA no longer have the monopoly on the spotlight as trendsetters. I felt that they were starting to look to Asia for ideas, and myself being Asian, found myself highly attuned to this beauty theory.”

Of course, the decision wasn’t without its challenges. For one, the language barrier was going to be an obstacle. “All of my five considerations (Taiwan, Singapore, Hong Kong, Tokyo and Seoul) would require me to learn a new language, though I refrained from letting that limit me,” she emphasizes. “If this is what I want in life, I want to pull no stops.”