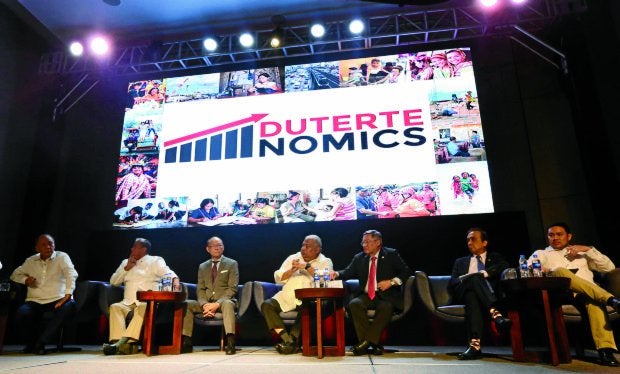 Airports, roads and bridges, railways, seaports, telecommunication and power facilities—collectively called an infrastructure network—make up the backbone of economic development. First World countries are what they are because they have adequate infrastructure. Sadly, the Philippines lacks a lot of it. As Finance Secretary Carlos Dominguez III has lamented, the Philippines was left behind in the region because of poor infrastructure.

The Duterte administration, criticized for the thousands of deaths related to its bloody war on drugs, now wants to make a difference on the infrastructure front. Its economic team last week unveiled the so-called “Dutertenomics” thrust of “build, build, build” that would usher in a “golden age of infrastructure.” It plans to spend P8.4 trillion over the next six years to build vital projects such that the share of infrastructure spending to the gross domestic product will rise from 5.4 percent this year to 7.4 percent by 2022. It plans to roll out 75 so-called flagship, game-changing projects that it aims to complete before then.

The figures are mind-boggling. But the government looks serious this time. For example, President Duterte and Japanese Prime Minister Shinzo Abe are reportedly scheduled to sign in November an agreement that would jump-start the construction of the Philippines’ first subway system, costing P227 billion, initially from Quezon City to Taguig City. There are also the additional 10-12 bridges that will cross Pasig River: Two will be financed by the Chinese government, Japan will take care of one new bridge near the existing Guadalupe bridge, and the government will shoulder the cost of constructing another through the national budget. There is the Philippine National Railways’ North Rail that will connect Tutuban in Manila with Clark in Pampanga. Construction will start by the second quarter of 2018; when completed in 2021, the 100-kilometer PNR North Rail will carry some 350,000 passengers a day for the 55-minute commute. Along with the PNR North Rail, slated to start by the third quarter of 2018 is the construction of the PNR South Rail that will connect Manila with Calamba and Los Baños in Laguna and the Bicol region. The government will also build more roads connecting islands nationwide, including one linking Matnog in Sorsogon and Allen in Samar and the Panay-Guimaras-Negros Island bridges.

What will make it different this time? One promise by the President’s economic team is faster project approval, which was part of his State of the Nation Address last year when he vowed to cut red tape in the bureaucracy. The government will also ensure that projects are better prepared, implemented and completed, with milestone monitoring to be undertaken for all big-ticket infrastructure projects. More importantly, the economic team promised to get as many projects as possible on the ground.

This could very well be the best thing to happen to the Philippine economy. We just hope Congress will act on the tax reform package submitted to it last year so that the administration will have the money to finance many of the flagship infrastructure projects it has lined up. Otherwise, it will be the same old story all over again. The promised infrastructure will remain just that—promises.

Belongings of missing UP Law prof discovered in Occidental Mindoro