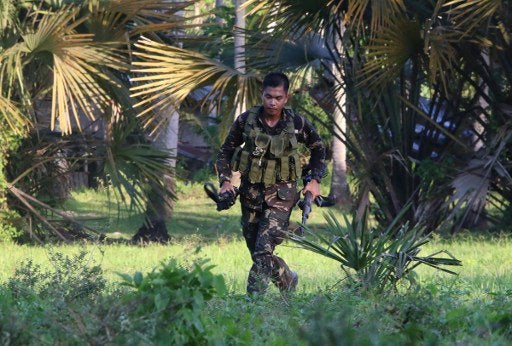 A soldiers runs after retrieving the rifle of a colleague after clashes in the village of Napo, Inabanga town, Boloh province, in the central Philippines on April 11, 2017. Nine people including four Philippine security officials were killed April 11 during clashes with suspected Islamic militants on a popular resort island as millions prepare to travel for the Easter holiday. AFP PHOTO

Relatives and neighbors are adamant: Crisenta and Constancio Petalco were not members of the Abu Sayyaf. They had known the Petalcos all their lives; how could this elderly couple be bandits themselves? The dreaded bandit group is flush with millions of dollars in ransom money from scores of local and foreign kidnap victims, but Crisenta and Constancio Petalco lived spartan lives, tending to livestock and living in a tiny hut in remote Sitio Ilaya, Barangay Napo, Inabanga, Bohol.

The husband was 65 and the wife was said to be in her 70s, hunched and rendered frail by arthritis. When a band of 10 heavily armed men entered their village last week, prompting a fierce firefight with military and police that resulted in the evacuation of about 3,000 residents, Constancio “went back to get his wife who could not walk properly and was packing their things for the evacuation,” according to a report in this paper. Apparently, the Petalcos were caught in the crossfire; after the gun battle, they were found lying dead outside their hut along with three suspected Abu Sayyaf members including the group’s alleged leader, Abu Rami.

The military announced that all five dead people were members of the bandit group, but village residents insist otherwise in the case of Constancio and Crisenta Petalco. According to Capt. Jojo Mascariñas of the 302nd Brigade of the Armed Forces of the Philippines, the couple were suspect because Joselito Melloria, the man seen by residents escorting the armed group into the village, was their nephew. Melloria, a former village resident, reportedly married a Muslim woman in Lanao, converted to the faith and became an Abu Sayyaf member. “Constancio is Melloria’s uncle, so they had a
relationship. We’re still looking into what kind,” Mascariñas has been quoted as saying.

Of course, any investigation would be too late. The Petalcos are dead, to much grief among their relatives and neighbors who have gone on Facebook to cry for justice and vent their protests at the military’s claims.

Some other murky details surround the official narrative so far about the Abu Sayyaf’s incursion in Bohol. One that stands out is the apparent lack of intelligence that allowed a group of armed men to set forth from their base in Indanan, Sulu, and turn up four days later in an island that’s among the country’s top tourist destinations. The military disclosed that it had, in fact, been told by “insiders” about the suspicious departure of the armed group from Sulu but that it didn’t know their destination, and so had to do some cross-checking. The interception came too late—when the Abu Sayyaf had already made a beachhead in Bohol and civilians were bound to be affected by any operation.

The information from “insiders” appears to have reached American intelligence as well. On April 9, the US Embassy in Manila issued an advisory warning its citizens against travelling to “Central Visayas, which includes Cebu and Bohol provinces.” But Malacañang, the police and the military all downplayed the travel warning. There was “no direct threat” to the region, said Chief Supt. Noli Taliño of the Police Regional Office 7 in Cebu City. Presidential Assistant for the Visayas Michael Dino also called on the US Embassy “to substantiate the report in order to avoid confusion among the local citizens and foreign visitors alike.”

The substantiation would come soon enough, in the form of an incursion and a gun battle that not only rattled a popular tourist hotspot and economic hub in the region, but also exposed the military’s shortcomings in terms of timely intelligence, even as it was eventually able to neutralize the armed men’s presence in Bohol. The AFP chief, Gen. Eduardo Año, is at least clear-eyed about the fatal gap in this case: The Philippines being an archipelagic nation, “we really need naval assets to conduct maritime security.”

That, or more incidents like the one in Bohol, where the fighting and air strikes also killed three soldiers and a policeman, are bound to happen.