Despite running for only 90 minutes, “Tu Pug Imatuy” (‘The Right to Kill’) delivers the experience of an epic. It manages this partly by alternating between quiet, lingering moments, and thrilling, kinetic sequences. But more importantly, the film exhibits a layered story—it is, at once, an ethnographic documentary, a primer on pressing social issues, and, without glorifying violence, something of a survival adventure.

(Note: this film analysis includes details of plot, or ‘spoilers’. It is written primarily for those who have seen the film.) 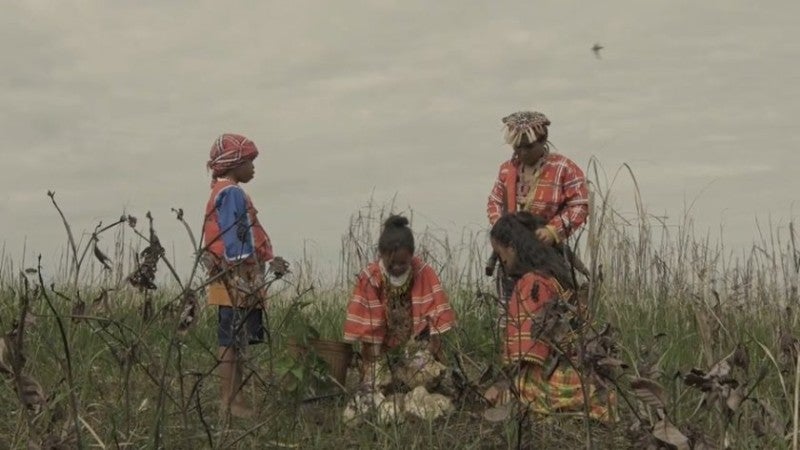 A still from the movie “Tu Pug Imatuy”

Three groups populate Tu Pug Imatuy: the “lumad” (the indigenous, non-Christian and non-Muslim peoples of Mindanao), government soldiers, and rebels. (Although the last group barely appears in the movie, they represent a major interest underlying the political setting of the film.) These groups and their “costumes”—the colorful textiles of the lumad, the standard fatigues of the soldiers, and the alternative uniforms of the rebels that come complete with Communist insignia—comprise all the people that is seen in the film. It is patently and completely a story about the troubled Philippine South.

The lumad are the protagonists in this film. The first act is an immersion into a Manobo family’s way of life and their world-perspective. The stories that Dawin (played by Jong Monzon) tells his children reveal a deep appreciation for the natural abundance of their people’s ancestral homeland. When, by a stroke of luck, Dawin and his wife Obunay (Malona Sulatan) captures a wild boar, they immediately talk about sharing the bounty with their neighbors and their datu (chieftain)—demonstrating a strong sense of community, despite their apparent poverty. Of course, it appears that material poverty does not worry them much; indigenous peoples have this manner of belief that as long as they are secure in their land, they are confident that nature will always provide for their needs.

Several scenes paint the picture of a family content with the simplicity of their life. The couple, at night in their kitchen, happily recalls the events of the day, bonding over the bounty of the hunt. A tragedy befalls them soon afterwards, however; their youngest child, Awit, is struck with high fever. Dawin rushes the boy to the river to try and relieve his temperature with cool water, but it was not enough. Obunay’s subtle expression of grief at the sight of Dawin returning with their dead child, the tears falling wordlessly from her eyes, provides the film’s first moving moment.

After the family buries Awit on the mountain, they tell themselves that the child is now one with nature—a method of coping with grief that further illustrates their affinity with the environment. The child’s grave is marked not by a cross (of course, they are not Christian), but by rocks and a frond with flowers.

What comes next is a greater tragedy.

COVID-19 and the limits of ‘expert knowledge’

Jumpstarting the economy after a pandemic

Mandaluyong hospital’s chief nurse passes away due to COVID-19

COVID-19 crisis could last up to two years, says Duterte

Razon: Count losses later on, PH yet to face the worst