A “slap in the face” is how a leading voice among the local LGBT (lesbian, gay, bisexual and transgender) community described the “turnaround” of President Duterte on the issue of same-sex marriage and gay rights. “Disappointing” is how academic and blogger Mark Pere Madrona described Mr. Duterte’s recent statement that same-sex marriage was against not just the law but also Filipino culture and morals, including Catholic teachings.

While Mr. Duterte’s policy turnarounds on a wide range of issues have left the heads of observers and pundits spinning, his rejection of “marriage equality” this time around is particularly puzzling.

In July 2015, guesting on a TV talk show (hosted by an openly gay comedian) at a time when he was still mulling a presidential run, Mr. Duterte said he would still accept his son if the young man came up to him and confessed he was gay. Everyone, he told host Vice Ganda, should “respect human dignity because all humans are created by God.” He added that he thought same-sex marriage is “good,” saying that “everyone deserves to be happy” and recounting that even as a student he felt bad about how his gay friends were being taken advantage of.

But a few days ago, talking to the media during a visit to Myanmar (Burma) and upon his return to the country, he said that he would not support any moves to legalize same-sex marriage, and that he is against blurring the line dividing men and women. This, he said, even if he has two brothers-in-law and cousins who are gay.

Why the turnaround? Did the public just misread his earlier supportive statements which convinced many among the LGBT community to vote for him? Or is his current rejection his way of wooing the support of the largely critical Catholic hierarchy? 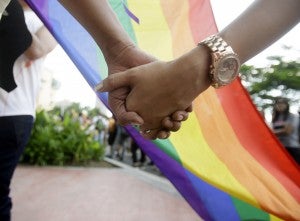 Filipino LGBTs (Lesbians Gays Bisexual and Transgenders) hold hands as they gather for a Gay Pride rally Saturday, June 27, 2015 in Mania, Philippines to push for LGBT rights and to celebrate the U.S. Supreme Court decision recognizing gay marriages in all U.S. states as a victory for their cause. The rally was scheduled to commemorate the 1969 demonstrations in New York City that started the gay rights movement around the world. Jonas Bagas, executive director of the pro-LGBT rights group TLF Share, said the U.S. court ruling will reverberate in other corners of the world. (AP Photo/Bullit Marquez)

Whatever. I suggest that folks who are both supportive or critical of the President’s current stance on the rights of LGBTs start viewing “Grace and Frankie,” a TV series available on Netflix. Jane Fonda, who looks pretty stunning for a 70-year-old, is Grace while Lily Tomlin is Frankie (Frances), and they are both discombobulated when their respective husbands of 40 years, Robert (Martin Sheen) and Sol (Sam Waterston), successful divorce lawyers and partners in a firm, confess that they are gay.

Not only that. The two men are gay and in love—with each other. And their love affair has been going on for the better part of 20 years.

Robert and Sol’s confession and their request for a divorce from their spouses throw both Grace and Frankie for a loop, along with their children, circle of friends, and associates.

No spoilers here. All this information is revealed in just the first quarter of the first episode, but the rest of the series (it is now on its third season) explores how the four principals cope with having their world turned upside down, and touches on, along the way, issues like aging, child rearing, infidelity, spousal support, rekindling old loves and discovering new ones.

It would be easy enough to turn the characters into broad caricatures, especially Frankie who is a painter and art teacher and lives a flaky, counterculture life. She is in sharp contrast to Grace who has retired from her own cosmetics company but is now itching for a comeback, except that her daughter has inherited the business.

But the people behind the series are not just interested in laughs and controversy. The show explores the emotional toll of divorce, the messy detritus of lingering love and lasting memories, the special difficulties of love and sex among senior folks—regardless of whether the protagonists are female, male and varied couplings in between.

I suggest that the President and whoever are his advisers on this issue, as well as legislators, policymakers and influencers, check out “Grace and Frankie.” It gives viewers a good time, of course, but also an occasion to reflect on the complications of human relationships and individual ways of surviving the slings and arrows, warps and wrinkles, joys and sorrows that life throws at us—women, men, gays and whatever gives us definition.