Women’s rights at the heart of Malacañang vs ‘Madam Secretary’ 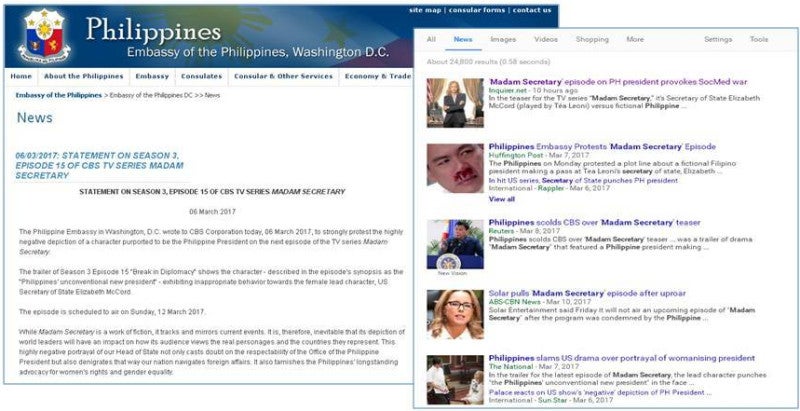 Sheldon Cooper, the socially-awkward physicist of “Big Bang Theory” fame (currently the No. 1 comedy show in the United States), popularized the word, “Bazinga!” as his catchphrase for a cruel joke on the set. First heard in the show’s Season 2 finale, the word gave birth to life in 2012 when a newly discovered specie, an orchid bee, Euglossa Bazinga, was named after it.

Sheldon himself has been immortalized in the heavens. With a global fan base, his fictional character was cultivated so well from the figment of his creators’ imagination that an asteroid, 246247sheldoncooper, is now also named after him.

With its narrators mastering the art of translating fiction to reality, the show’s legacy is secured–Big Bang Theory is now the most valuable money-making franchise of Continental Broadcasting Corporation (“CBS”).

CBS also owns the rights to the controversial show “Madam Secretary,” where the US Secretary of State, Elizabeth McCord (played by award-winning Tea Leoni), punches the fictional Philippine President Andrada in the face after being groped from behind while on a diplomatic visit to Malacañang.

Currently the No. 1 network in the US, CBS raked in more than $13 billion in 2016 by delivering hits such as “Big Bang Theory,” “NCIS” and “Blue Bloods,” as well as owning Showtime, which made record earnings from the 2015 Mayweather-Pacquiao fight.

But cable TV is an extremely tough business, so the networks have to remain creative to ensure success in the most important measure that drives profits–TV ratings:

With more than 11 million viewers, CBS ratings are falling and under constant threat from NBC (which produces “The Voice” and “Saturday Night Live”) and ABC (“The Bachelor” and “Grey’s Anatomy”). Hence its executives always spin new narratives for its shows, including “Madam Secretary”… and set the trap they did.

The DFA takes the bait

The statement from the Department of Foreign Affairs is a response to the genius of a gambit by CBS to develop a story around the Philippine leader, aptly described by Elizabeth McCord as “an erratic strongman …. insecure and weak, forcing himself on women to feel powerful.”

The statement generated significant coverage and publicity a week prior to the March 12 episode. Malacañang is worried that the show shines a negative light on the Office of the President of the Republic of the Philippines. But not quite; the whole world already knows of President Duterte’s prejudice against women.

In my years negotiating with the world’s top corporations–one principle holds true on how to capitalize unconventional situations: change the narrative to control the story. With this, Malacañang has three options: