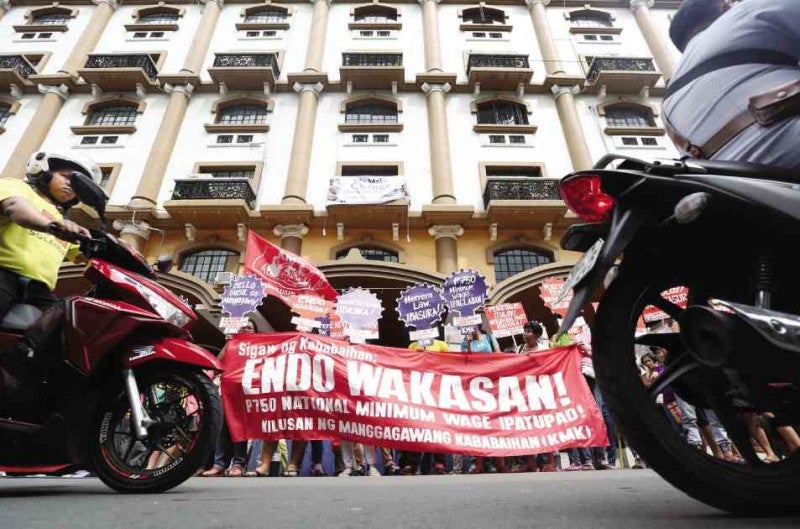 The “endo” campaign, some workers’ groups claim, is finally off the ground. But the question remains: When will “endo” really come to an end?—MARIANNE BERMUDEZ

After decades of consistent struggle against the epidemic of contractualization, workers may finally get their wish for its total prohibition, at least at the level of the Office of the President.

“Ayoko itong agency-agency… walang agency-agency hiring. Kawawa ang worker sa ganito (I don’t want this hiring via agencies. In this kind of arrangement, the workers end up pitiful),” President Duterte said in a three-hour-long dialogue with labor leaders, as he expressed empathy with the Filipino workers’ plight, assuring them that he is not going to renege on his promise to end contractualization in the private and public sectors.

Also in that meeting, he directed Labor Secretary Silvestre Bello III to issue an order restoring the norm of regular jobs through direct hiring; instructed the Department of Labor and Employment to resolve, soonest, the 2011 PAL-Palea dispute on outsourcing. And he indicated that he was inclined to honor the request of labor to certify TUCP Party-list Rep. Raymond Mendoza’s House Bill No. 4444 as an urgent administration measure.

Contractualization only enriches the employer but keeps the workers poor and unable to plan a better life for the future, the President pointed out, adding that many of the agencies are also owned by the employers themselves and are just a legal camouflage to prevent the regularization of workers, thus defeating workers’ rights under the Constitution.

Further, the President categorically stated that his “endo” policy extends fully to ending contractualization through middlemen or manpower agencies. He thus ended months of speculation in the business community that he may only be after agencies practicing endo (the hiring of workers for only five months).

More than a third of workers in establishments employing 20 people and more are “nonregular,” this according to the latest survey conducted by the Philippine Statistics Authority. The number would have risen significantly had the survey covered firms employing less than 20 workers, which comprise more than 90 percent of registered business establishments.

The President’s order for the DOLE to play hardball poses a major challenge to Congress as well. In the past several months, DOLE officials and legislators have been pushing for the compromise position proposed by the Department of Trade and Industry and employers’ groups. How they will react to this directive of the President has yet to be seen.

We, therefore, urge our fellow workers to remain vigilant to make sure that the concerned executive agencies will comply with our demands and do not stray. This recent advance in our struggle for decent work confirms the power of organized unions to fight antilabor policies.

The President made as well several other commitments that we need to press forward, including our proposal for a review and changes in the present regime of wage-setting; the signing of International Labor Organization Convention 151 for the public sector; representation in tripartite bodies; deputization of labor leaders as inspectors; and the holding of regular dialogues with labor, including meeting with striking transport workers.

It ain’t over until it’s over. Workers have a world to win. The struggle goes on.

OWWA: Over 7,400 stranded OFWs so far sent to home provinces