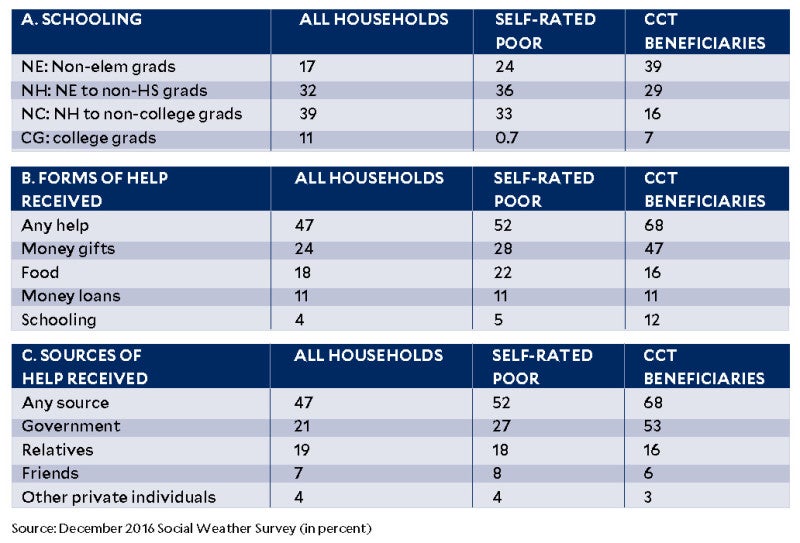 In my opinion, the key explanation for poor performance in reducing poverty is the failure to provide universal high school education to the citizens.

Every Filipino should complete at least 10 years—ideally at least 12 years—of basic education to be able to earn enough to avoid poverty. The aim should be 100-percent completion of senior high school. High school dropouts can have little hope; elementary dropouts can have none at all.

Among the current beneficiary families of the conditional cash transfer (CCT) program, 68 percent of the heads have not finished high school—a proportion higher than that of the Self-Rated Poor because the CCT has a targeting system aiming at the extremely poor. The CCT is designed so that, ultimately, the children of these families will all obtain their minimal schooling, and thus the next generation will be able to escape poverty.

The CCT is a long-term program that should not be interrupted, to give time for the children to be universally educated. Among the CCT families found in the sample of the December 2016 Social Weather Survey, 30 percent had been in it since at least 2010, 33 percent started in 2011-12, 25 percent started in 2013-14, and 10 percent only started only in the last two years.

A “full dose” of CCT assistance would provide 12 years of basic education for the children. Thus, most of the families currently in the program have received only a partial dose of it. So let us be patient. Stopping, or even weakening, the CCT program in midstream would be utterly stupid.

Forms and sources of help received by households. Aside from determining the poverty status and the hunger status of the sample households, the quarterly SWS surveys often ask the household heads what types of help they have received in the past three months, and from whom the help came. The results of the December 2016 survey are in Parts B and C of the table.

Almost half of all households, whether poor or not, receive some help. The most common types of help are money, food, and loans. The CCT families have far more citations of help in terms of cash and schooling. Their help from the government is twice as frequent as the national average. Were it not for the CCT, the most common sources of help would be relatives and friends.

Special tabulations for this column were made by Josefina Mar of SWS. Contact mahar.man[email protected]