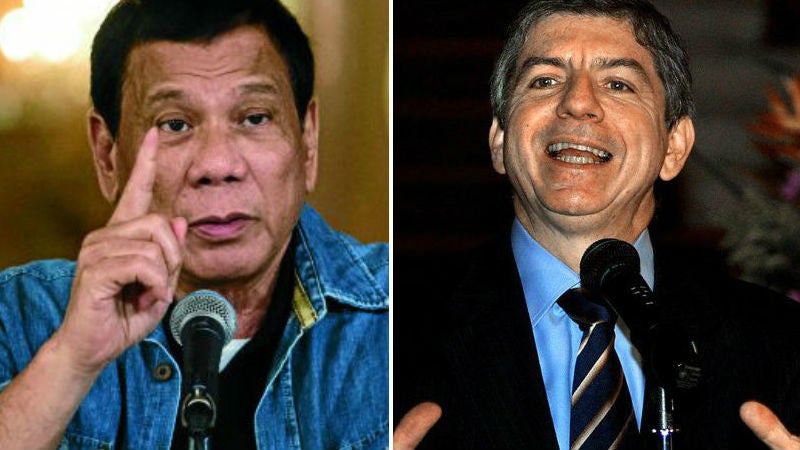 The other day, the former president of Colombia wrote an unusual open letter to the incumbent president of the Philippines. Cesar Gaviria’s letter was published as an opinion piece in The New York Times, with the headline: “President Duterte is repeating my mistakes.”

The primary message Gaviria wanted to send to Mr. Duterte was summed up in his first three sentences: “Illegal drugs are a matter of national security, but the war against them cannot be won by armed forces and law enforcement agencies alone. Throwing more soldiers and police at the drug users is not just a waste of money but also can actually make the problem worse. Locking up nonviolent offenders and drug users almost always backfires, instead strengthening organized crime.”

Gaviria had a secondary message. The Colombian president who finally ended the reign of, in his own words, “the planet’s most notorious drug trafficker, Pablo Escobar,” came to realize the limits of the war on drugs that the US government started four decades ago: “Taking a hard line against criminals is always popular for politicians. I was also seduced into taking a tough stance on drugs during my time as president. The polls suggest that

Mr. Duterte’s war on drugs is equally popular. But he will find that it is unwinnable. I also discovered that the human costs were enormous.”

In other words: Been there, done that. Despite “taking down” Escobar, however, Gaviria said the drug crisis continued to worsen, until the Colombian government changed its strategy. “We started making positive impacts only when we changed tack, designating drugs as a social problem and not a military one.”

Here, then, was well-meaning advice, from a leader who had drawn a humbling insight from personal experience. President Duterte’s response was—to use the language of millennials—harsh. “Sabi nila (They say) Colombia has been lecturing me about [the war on drugs],” he said at the anniversary rites of the Bureau of Customs. “That idiot.”

The President did not mention Gaviria’s name (perhaps he had not in fact read the op-ed piece and had only been briefed); he did try to distinguish the Colombian experience from the Philippine situation by focusing on the difference between drugs in predominant use.

“You know, doon (there it’s) cocaine. Cocaine pati (and) heroin is not really [harmful] … Cocaine pati (and) marijuana, medyo okay iyan. You can still communicate,” he said. Shabu, on the other hand, is a “virulent chemical.” On many previous occasions, he claimed that prolonged  shabu  use made users less than human.

As an empirical statement, the President’s claims are subject to testing; is prolonged use of cocaine or heroin in fact not harmful to the user’s long-term health? (He must also demand an explanation from Philippine National Police chief Bato dela Rosa, who traveled to Colombia last September to study its campaign against drugs.) But the focus on the difference in drugs misses Gaviria’s point. Even though the Colombian politician concedes that “illegal drugs are a matter of national security,” he also emphasizes his hard-earned conviction that “military hardware, repressive policing and bigger prisons” are not the answer.

But what can we expect from a president who has publicly complained about having to spend government funds to subsidize the rehabilitation of drug users? In Mr. Duterte’s view, the trade in illegal drugs can only be stopped through violent means and repressive measures.

Or perhaps the President did read the open letter, and smarted from the implied criticism in passages such as these: “Tens of thousands of people were slaughtered in our antidrug crusade.” “But extrajudicial killings and vigilantism are the wrong ways to go.” “The war on drugs is essentially a war on people.” And, not least: “A successful president makes decisions that strengthen the public good.”

As is President Duterte’s wont, he reacted to the mirror of criticism dismissively, and reflexively used the language of insult he favors in public forums. “That idiot.”

Security guard aspiring to be lawyer receives gift from lawyer

Over 100 fake accounts traced to PH police, military shut down by Facebook

Thurman says he got ‘depressed’ after loss to Pacquiao