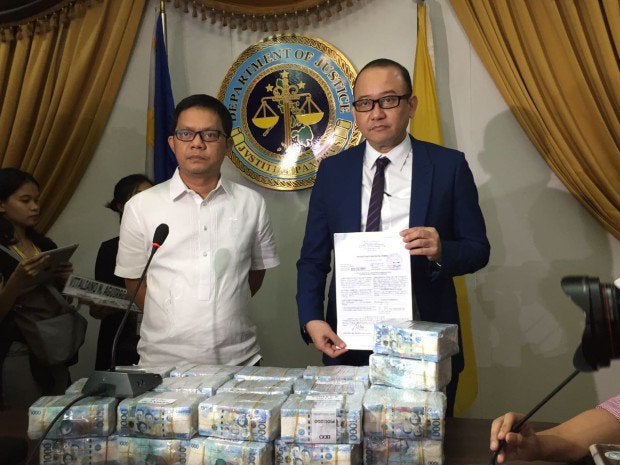 Well and good. The government’s swift action deserves commendation, given the outrageous particulars of the case. In swift order, the narrative about Lam has gone from the initial straightforward story about President Duterte discovering irregularities in Lam’s gambling business and going tough on him as part of his campaign against corruption, to Aguirre’s bizarre claim that Lam appeared to be bribing him at one point but really wasn’t, and finally to the revelation that two immigration officials—appointed by Mr. Duterte and, in fact, his “brothers” in the Lex Talionis law fraternity of San Beda College—had squeezed Lam of P50 million.

The money was supposedly for the release of 600 of the more than 1,000 Chinese nationals found to have been working at Lam’s Fontana Resorts and Casino in Pampanga without proper papers. The cash was turned over to Robles and Argosino by Lam’s middleman Wally Sombero, a one-time police official; the turnover took place in another casino complex, the City of Dreams Manila. Unfortunately for Robles and Argosino, the whole thing was caught on camera.

FEATURED STORIES
OPINION
So how much is the ‘kick-vac’?
OPINION
A promise wasted
OPINION
The last cha-cha

The existence of video footage would have made this matter pretty much an open-and-shut case, but the two immigration officials, after holding on to the money for 16 days, concocted a laughable, utterly unbelievable, justification for their crime: They received the money, they said, only as part of an entrapment operation against Lam, as “future evidence” in any criminal case against him. Furthermore, they claimed, they were just framed and set up by Sombero in collusion with their BI colleague Calima, who, in a further twist to the case, turned out to have received P18 million of the money, while Sombero got P2 million.

The sight of them on TV holding bundles of the money in what could only be described as a badly scripted production number about ostensibly returning what was left of the bribe (P30 million) to the government was hilarious. Nevertheless, Robles and Argosino maintained straight-faced: “Our integrity is intact.”

The Department of Justice must have heard the peals of derisive laughter from all over the country, because the loquacious Aguirre, while in the beginning appearing to give credence to the two officials’ claim of having been set up, eventually admitted the enormous embarrassment that the scandal has inflicted on the administration. The fight against corruption, after all, is a central plank of his boss’ promised brand of governance, yet here was a brazen, thoroughly documented case of disgraceful conduct not only by officials in high places, but officials appointed by Mr. Duterte himself.

Strangely, the President, who has launched extensive broadsides against Lam and his alleged crimes, has yet to say a word specifically about his “brods,” other than a repeated oblique warning that he would be unforgiving against foe and friend alike in rooting out corruption. Inevitably, one is left to wonder: Had this sordid episode not been caught on camera and remained in the contestable realm of insinuation and allegation, would the administration have given its erring lieutenants the boot this swiftly? And, more importantly, what does it plan to do next?

The case, after all, does not end with dismissal. The Office of the Ombudsman is ready to look into it. Robles, Argosino et al. should be charged and made to answer in court for their deeds. Removing people like them from public office is only half the battle.

PH named 2nd most ‘Instagrammable’ place in the world

For P500, you can book this QC garden for private dining

Ryan Garcia to Pacquiao: ‘Please pass the torch to me’